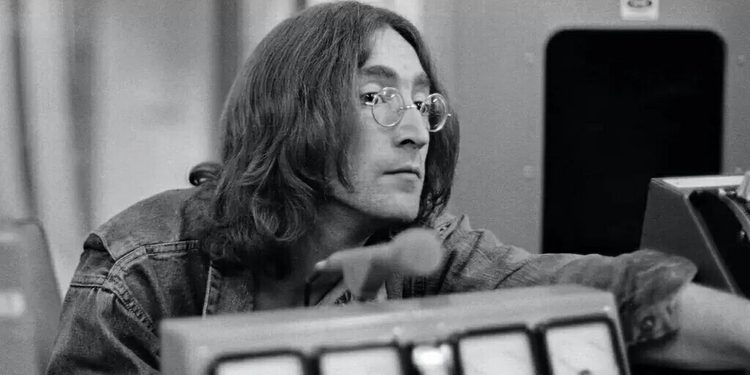 John returned home from the Beatles’ spiritual retreat in 1968 with a big batch of new songs. You might think they would have been uplifting and joyful, but you would be wrong. Most of the songs Lennon wrote in India were among his darkest with the Beatles: “Happiness is a Warm Gun”, “I’m So Tired”, “Sexy Sadie“, and the bleakest of all, “Yer Blues.”

Clearly the utopian dreams of flower power were on the wane. For John especially, songs of fun whimsy were being replaced by unromantic authenticity. This was the start of when John wrote raw, confessional songs, which would reach its peak with his first post-Beatles solo album, Plastic Ono Band. Both musically and lyrically, “Yer Blues” is like most blues songs: It’s really depressing. John howls of being lonely, hating everything, and wanting to die. He feels like a shell of a human being, just like “Mr. Jones” from the song “Ballad of a Thin Man” by his idol Bob Dylan. 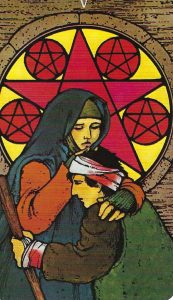 The 5 of Pentacles is the tarot card signifying illness, either literal or spiritual. It also indicates being in a state of lack, of missing something important to feel whole again. When this card appears in your reading, consider how you are confronting issues of soul searching, victimhood, and being in a state of wanting. If you deal honestly with these issues when they arise, you can mitigate the kind of desolation that John sings about in this song.

Lennon later admitted that the many hours of meditation in India brought out some real darkness in him. This might seem surprising, but it’s not. Yes, effective meditation practices do connect us to the source of light we all have deep inside of us. It generally makes us feel good. But as Carl Jung pointed out, when we go within ourselves, we can expect to encounter our “shadow.” Just like actual light creates shadows, the light within us creates dark elements of our own psyche.

A healthy path of spiritual awakening includes much more than feeling amazing all the time. It’s important to acknowledge and face the inner darkness too, in order to heal the fears and insecurities that naturally arise during self-discovery. If you ignore your shadow, it will become ever darker, more hidden, and more powerful. Spiritual awakening isn’t all sunshine and rainbows; the process includes getting real with ourselves and dealing with the difficult issues that arise from within.

Blue mist round my soul

Even hate my rock ‘n’ roll

This is song #10 of the Beatles Song Tarot Project. Click here to learn more about this magical, mystical trip through the Beatles catalogue.