Why Don’t We Do It in the Road? – Strength 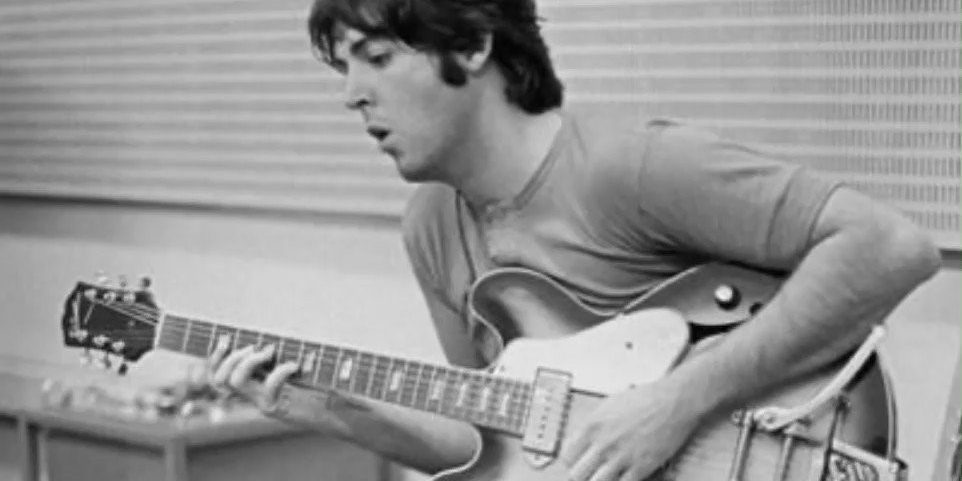 Why Don’t We Do It in the Road? – Strength

As the Beatles neared completion of the sprawling double-record that would be known as the “White Album”, Paul had one final track he wanted to record. John and George were busy working on other songs at the time, so McCartney grabbed Ringo to help him with the short and simple “Why Don’t We Do It in the Road?”. Years later John admitted he’d been hurt that Paul didn’t include him on the track. But this was the way the Fab Four made music at that time: Each Beatle focused primarily on the songs they had written, and the final versions rarely included contributions from all four members.

It’s no surprise that John would have wanted to be part of “Why Don’t We Do It in the Road?”. The explicit song about sex is the sort of edgy composition we would have expected from him. But this was Paul’s turn at being naughty. It’s one of several examples on the “White Album” where Paul went against type, creating something other than the sweet love songs he’d become so well known for. 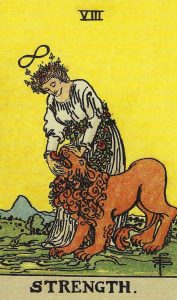 Paul wrote “Why Don’t We Do It in the Road?” while in India, shortly after watching two monkeys, well, doing it in the road. He was struck by the direct, uncomplicated nature of it and said later, “I thought … that’s how simple the act of procreation is … We have horrendous problems with it, and yet animals don’t”. Considering it features such a sparse arrangement, a simple 12-bar blues structure, and just two lines of lyrics, we might say that “Why Don’t We Do It in the Road?” is a primitive song about a most primitive act.

We have a primitive side to our nature as well. The tarot’s Strength card symbolizes this more primordial part of our being, often lying just under the surface of conscious awareness. Many versions of this card show a young woman taming a lion. This imagery represents the dichotomy between our animal instincts and our human reason. At any given time we may be controlled by our deep-seated impulses, or we may be in control of them. As humans, the choice is ours. The lion is shown licking the woman who’s tamed him, signifying that the way to control our urges is through love. True strength does not come through force, but through self-awareness, self-control, and self-love.

When you draw the Strength card in your readings, become aware of the animal side of your nature. It may emerge in a variety of ways, such as through raw emotions like fear; an impulse toward violence; or lustful urges like those unscrupulous monkeys in India. If we become aware of these powerful instincts, we may tame them and harness them for our benefit. As “Why Don’t We Do It in the Road?” progresses over its 1:42 runtime, Paul sings with ever-increasing volume and fury. It sounds like his animal side is getting the best of him.

No one will be watching us

This is song #95 of the Beatles Song Tarot Project. Click here to learn more about this magical, mystical trip through the Beatles catalogue.