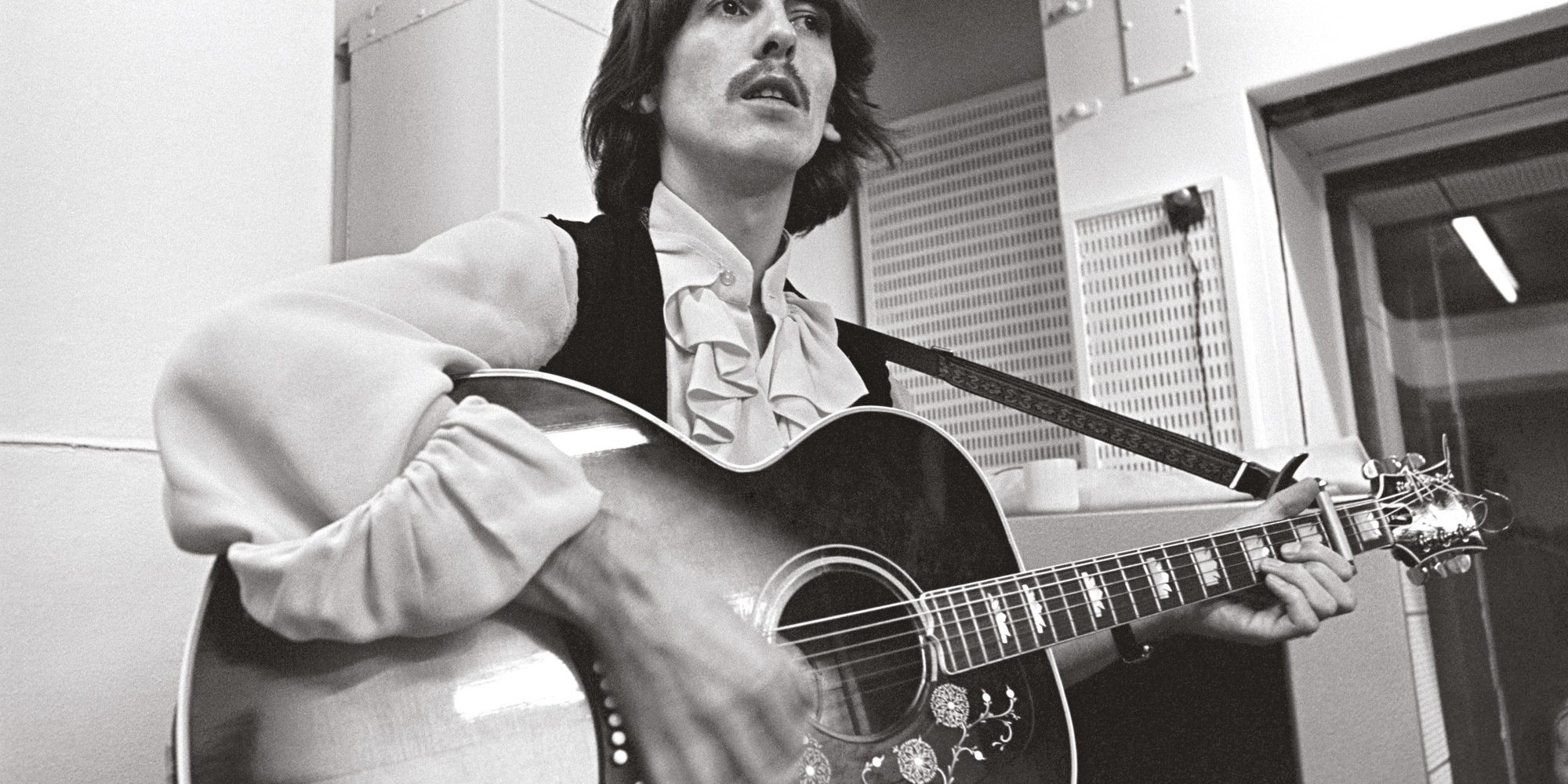 By the time the Beatles recorded their self-titled album in 1968, George Harrison’s spiritual studies were starting to bear serious fruit in terms of his songwriting. “While My Guitar Gently Weeps” was George’s greatest composition up to that point and arguably the best song on the entire White Album. After experimenting with Indian instrumentation and arrangements for the previous year, “While My Guitar Gently Weeps” marks George’s return to guitar-based compositions. It began as a soft folk song but was given a much heavier treatment when recorded for the album.

John and Paul didn’t show much interest in “While My Guitar Gently Weeps” initially. George had been growing weary of his bandmates’ lackadaisical attitude toward his compositions so he invited his good friend and Cream guitarist Eric Clapton to contribute the lead guitar part. The plan worked. The other Beatles took the song more seriously and gave their best effort while accompanied by an outsider who was regarded as one of the guitar gods of the era.

George wrote “While My Guitar Gently Weeps” shortly after returning from India, where he and the other Beatles studied Transcendental Meditation with the Maharishi Mahesh Yogi. Unlike his three bandmates, who quickly came to see the month-long retreat mostly as a misguided folly, George had fully bought into Eastern philosophy. Inspiration for this song came while he was studying the I Ching, an ancient Chinese divination text that translates to “Book of Changes”. As he recalled later:

“In the West we think of coincidence as being something that just happens… but the Eastern concept is that whatever happens is all meant to be, and that there’s no such thing as coincidence; every little item that’s going down has a purpose…I decided to write a song based on the first thing I saw upon opening any book – as it would be relative to that moment, at that time. I picked up a book at random, opened it – saw ‘gently weeps’ – then laid the book down again and started the song.”

Through meditation and other spiritual practices, George was beginning to view himself and life from a much higher perspective. He was developing a greater awareness of the interconnectedness between all beings and all events that happen in life. In the process, he was discovering that living from this perspective makes it easier to have greater compassion, understanding, and love toward other people, animals, and  even life itself. The lyrics to “While My Guitar Gently Weeps” are direct appeals to those who have not yet awakened to this greater, more-loving consciousness. 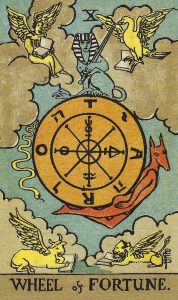 The Wheel of Fortune is the tarot card symbolizing the always-changing nature of life. Around and around the wheel we go, our fortunes at the mercy of fate as we experience the ups and downs during life’s many stages. The big question that was on George’s mind is do we learn and grow as the wheel of our life turns, or are we destined to repeat the same mistakes over and over again?

A valuable lesson can be learned by looking at the nature of how an actual wheel turns. Notice that a spot on the edge of the wheel travels the distance all the way around the circumference. But a spot at the very center of the wheel does not travel at all. This is a powerful metaphor for the contrasting ways we can experience the ever-changing nature of life. From our center we experience life’s changes much less dramatically. We’re connected to the powerful and wise center of our being where we can be still and mindful. On the edge of the wheel, however, we’re at the mercy of life’s never-ending ups and downs. From this perspective we get too caught up in the dramas of our lives to make any true lasting changes. This more ego-driven viewpoint can – in George’s words – get us inverted, diverted, and perverted away from love-based consciousness.

So how do we cultivate the ability to reach our center and gain this greater perspective? For our answer we look to the sequence of the tarot’s Major Arcana, which is not arbitrary but rather reveals a natural order. The Wheel of Fortune is key number 10 and is preceded by the Hermit, key number 9. And it’s not surprising that shortly before composing “While My Guitar Gently Weeps”, George had composed songs with the Hermit as their theme. His greater perspective of the turning of life’s Wheel came only after George had immersed himself in the ways of the Hermit; he went on a soul-searching journey of self-discovery and dedicated himself to spiritual practices that cultivated greater enlightenment.

When you draw the Wheel of Fortune in your readings, it may be seen as an invitation to consider the ever-changing nature of life. Perhaps you’re entering a new stage or you’re acutely experiencing the ups and downs that comprise all of our fates. Remember that from a certain perspective, everything that happens is meant to be. And there’s always an opportunity to awaken to the love that is inside of us.

“I look at the world

And I notice it’s turning

While my guitar gently weeps

We must surely be learning

This is song #79 of the Beatles Song Tarot Project. Click here to learn more about this magical, mystical trip through the Beatles catalogue. (scroll down to watch a video for an earlier acoustic version of the song.)