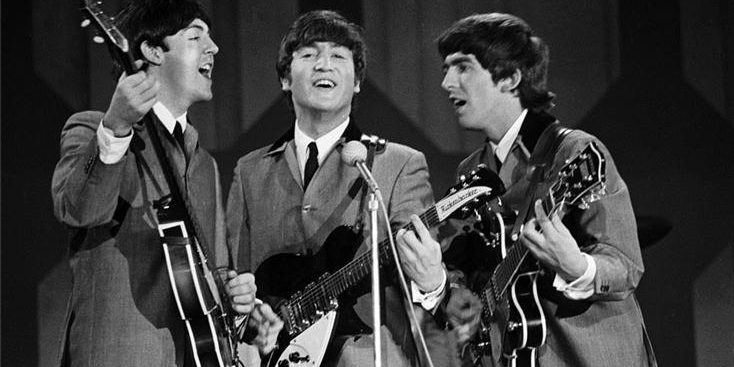 “This Boy” is a beautiful showcase of the Beatles’ ability to sing in close 3-part harmony, with John providing the low part, George the middle, and Paul the high notes. It was recorded the same day as their smash hit “I Want to Hold Your Hand”, and then served as the B-side of the single. The Fab Four included “This Boy” in their live shows, with the song serving as a nice change of pace from the energetic songs from the rest of their set. It was the quiet, sentimental moment when the Beatles showed off their impressive vocal skills.

John and Paul composed “This Boy” in a hotel room while on tour. John, serving as primary composer, was influenced by the doo-wop style of artists such as the Platters, the Coasters, and especially Smokey Robinson and the Miracles. Doo-wop, popular during the 1950’s and early 60’s, is often characterized by simple instrumentation, tight harmonies, and heartfelt lyrics. The vocal delivery on “This Boy” is heartfelt too, as we unmistakably hear from John during the bridge section of the song. Listen to the passion build, culminating with the line, “he’s seen you cry.” 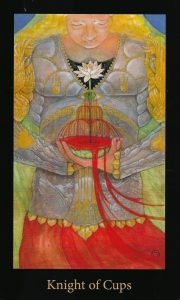 Because of its highly emotional and romantic nature, “This Boy” corresponds well to the tarot’s Knight of Cups. The tarot’s four Knights represent the personification of the suit’s element taken to extreme. The suit of Cups symbolizes the element of Water, and Water relates to matters of the heart. Put these considerations together and we find that a Knight of Cups is passionate, romantic, idealistic, and artistic. They follow their hearts to the utmost and express themselves that way too.

Each of us has a Knight of Cups side to our personality. The tarot’s Knights, who traditionally appear on horses, symbolize a lot of power, but they also warn us of taking things too far. When you draw this card, consider how to express the impassioned, deeply emotional part of you in a way that is most helpful for the situation. May your heart guide you but be careful of melodrama, self-indulgence, or losing your head completely.

Upon its release, “This Boy” received special praise from Michael Mann, a respected music critic for The Times, who observed that the song contained “chains of pandiatonic clusters”. A Knight of Cups would have no interest in these academic considerations, however. They would be concerned only in how the song makes you feel. Many years later, reflecting on the best melodies he ever wrote, John singled out “This Boy” as one he was especially proud of. He knew it was special because of the feelings it expressed and brought out of those who heard it.

“This boy wouldn’t mind the pain

Would always feel the same

If this boy gets you back again.”

This is song #76 of the Beatles Song Tarot Project. Click here to learn more about this magical, mystical trip through the Beatles catalogue. (scroll down for a live version of this classic!)