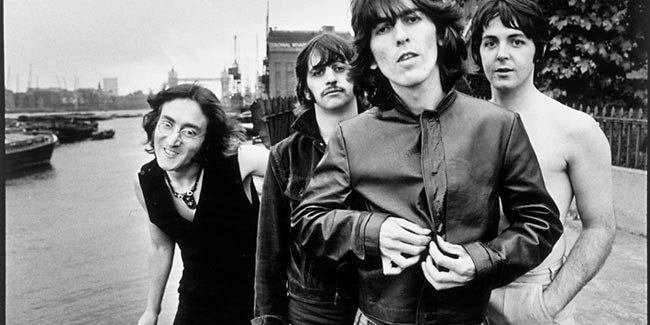 “The Continuing Story of Bungalow Bill” is a silly sing-along appearing on Side 1 of the White Album. The song was written by John while the four Beatles were on retreat in Rishikesh, India, with the Maharishi. Among the other people at the compound were the wealthy American socialite and spiritualist Nancy Cooke de Herrera and her son Richard Cooke III (aka “Rik”). By his own admission, Rik was an unsophisticated college student with a crew cut who didn’t connect particularly well with the enlightened types who were at the ashram, notably the Fab Four.

The song tells a true story, with “Bungalow Bill” playing the role of Rik. At some point during the retreat, he and his mother were among a group that went out on a tiger hunt, and he successfully killed one. By the time they returned to the retreat, Rik was feeling remorseful and talked to the Maharishi about it. John and Paul happened to be present for his retelling of the events and were struck by the hypocrisy of going on a hunt between meditation sessions. Afterward John channeled his disdain toward the American into this song. For the record, Rik’s mother Nancy defended her son, saying he killed the tiger in self-defense (which inspired the line “not when he looked so fierce”, sung by Yoko) The story has a happy ending though: it was the last time Richard Cooke III ever went hunting, and he soon became a professional photographer for National Geographic. 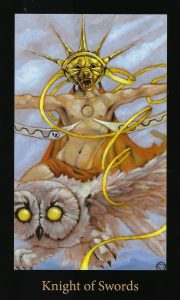 The card that best represents Bungalow Bill is the Knight of Swords. Considering that actual swords are used as weapons, this Court Card character best symbolizes the personification of aggression and hostility. Most tarot decks portray this Knight in a noticeably intense and combative posture. He’s rushing ahead, set on dominating anyone or anything in his path. Drawing this card often warns against – or sometimes advises for – using aggression to get what you want out of a situation.

The Knight of Swords is an especially good fit for this song because it also symbolizes its composer, John Lennon, at least within the context of this song. Each of the tarot’s Knights symbolize an extreme of the element that is indicated by the suit. The suit of Swords represents the element Air – which is the mental realm – and John always had a reputation as the smart Beatle. With “The Continuing Story of Bungalow Bill”, he weaponized his intellect, cleverly expressing his scorn for the cruel American in a satirical, taunting composition. John’s verbal swords would only get sharper as he grew more interested in political causes over the next few years.

For “Bungalow Bill”, John shrewdly incorporated some American references in his song about the “All-American bullet-headed saxon of a son”. The intriguing title is reminiscent of an exciting American movie serial, and the Spanish guitar introduction sounds like it came directly from an American-style Western film. Also, the name “Bungalow Bill”, as John said years later, came from a combination of an American comic strip and television character named “Jungle Jim” – known for his wild hunts – and the legendary Western frontiersman (and hunter) Buffalo Bill Cody. Lennon even name checks the powerful American comic book character Captain Marvel. That’s a lot of American references, all subtly suggesting some form of real or fictional violence.

With American military involvement in Vietnam peaking and the recent assassinations of Martin Luther King and Bobby Kennedy, do you think maybe John was making a comment about the Knight-of-Swords-esque American psyche?

“Deep in the jungle where the mighty tiger lies

Bill and his elephants were taken by surprise

So Captain Marvel zapped him right between the eyes.”

This is song #71 of the Beatles Song Tarot Project. Click here to learn more about this magical, mystical trip through the Beatles catalogue.