There are many types of card decks suitable for divination, such as Oracle Cards, Angel Cards, and Lenormand. Any of these may help us develop our intuition and awaken to the wisdom we possess within.

What sets tarot apart is its perfect structure. The order of the cards is not arbitrary; it adheres to a system that was established as the earliest tarot decks emerged hundreds of years ago. Although they come in many styles, what makes a deck “tarot” is that it has 78 cards arranged in a profoundly meaningful way.

The tarot deck structure is very similar to a playing card deck. It has four suits; numbered cards Ace through ten in each of those suits; and Royalty cards (generally called “Court Cards” in tarot). What sets tarot apart – and makes the deck noticeably thicker – is a set of trump cards, like the Joker in the playing card deck.

As you learn tarot, please keep in mind that all cards contain symbolic pictures that represent both the inner world of the psyche, and the outer world of our experience of life. In other words, depending on the context of when we draw the card, it reflects something significant occurring within our inner world, outer world, or both.

The deck contains three subsets of cards, each symbolizing a different aspect of these worlds. 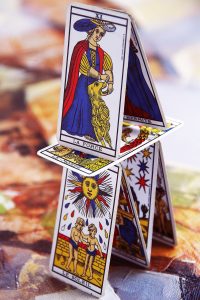 The 22 trump cards are commonly referred to as the major arcana. Major arcana means “greater secrets” and these very special cards represent the primary themes of the life experience. On first glance you may find they feel both mysterious and familiar at the same time. That’s because they represent forces that exist deep inside you, waiting to be discovered and integrated into your being.

These 40 cards are numbered Ace – 10 in the tarot’s four suits.  The minor arcana represent the “lesser secrets” of the tarot deck, meaning that they symbolize the underlying dimension of day-to-day life. They’re “minor” in name only, though, since they reveal the hidden nature of reality that lies just below the surface of normal waking consciousness.

The tarot’s four suits represent the four primordial elements of nature. These elements can be appreciated as the basic building blocks of the inner world of the psyche and the outer world we experience in our lives. The suit of Wands corresponds to the element Fire; the suit of Cups represents Water; Swords represent Air; and finally the suit of Pentacles (sometimes named Disks or Coins) symbolizes the element Earth.

These 16 cards are comprised of four sets of royal characters, one for each suit. In most tarot decks, the characters include the King, Queen, Knight, and Page. Court Cards are traditionally considered part of the minor arcana but are interpreted differently than the numbered cards. This set of cards represent different personality types, those of the people throughout our lives and that exist universally inside all of us.

Please click the links below for meanings of tarot’s 78 cards. My interpretations come from my personal experience working with tarot every day since 2013, along with the variety of source materials I’ve learned from during that time. I am forever indebted to the tarot visionaries and writers who have provided me a foundation for understanding these 78 parts of myself and the world.

Please feel free to use these interpretations in your own tarot workings. As you gain experience, I encourage you to develop your own personalized meanings for each of the cards. If you’re committed to the process of learning and patient enough not to expect instant miracles, this will come organically in its own time. Remember, no rush; enjoy the journey! As you make these cards your own, the true magic of tarot reveals itself. Working with it becomes easier and more deeply insightful. (and, yes, more fun too!)

Images are of the Rider Waite Smith deck, available in many versions from US Games. It was created by Arthur Edward Waite and Pamela Coleman Smith, and remains the most influential deck in tarot today.