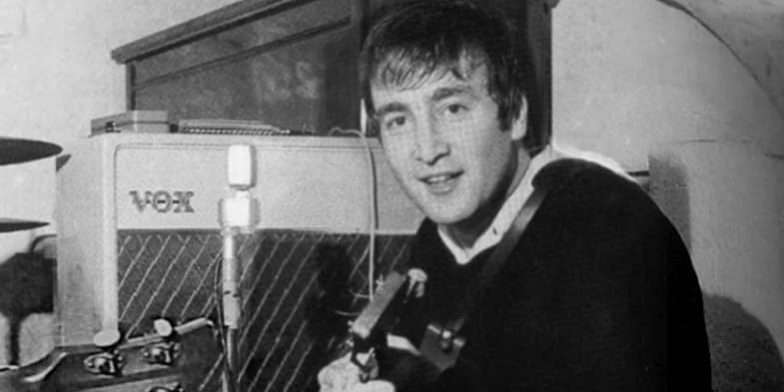 There was such demand for Beatles music in 1964 that even two albums weren’t nearly enough. To fill the gap in anticipation of their third album, A Hard Day’s Night, the fab four hastily recorded a 4-song EP in the spring of that year. Three of those songs were covers of songs they’d been playing live for years.

Larry Williams released “Slow Down” as a B-side to another song the Beatles liked, in 1958. The energetic song is a good fit for John’s alpha-male image and fiery vocal style. You can tell John is having fun, especially with that scream at 1:39. At the conclusion of the song he lets out a little “woo!”, a final release of all that rocking energy he’s been channeling for the previous three minutes.

Before John evolved and embraced his inner-feminine, he sang several songs about sexual conquest. That makes the title of “Slow Down” a little misleading. The singer is not telling his love interest that she’s too aggressive for him. Rather, she needs to slow down in terms of leaving him! We hear in the opening verse that he wants one more chance, implying that she’s threatened to leave him before. His suggestion to rectify the situation is to stop seeing other men and give in to only him. Well, it has a certain caveman logic to it! 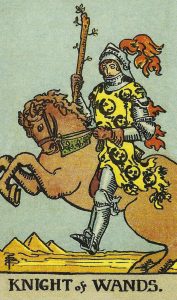 The Knight of Wands is the tarot card symbolizing an extreme of the element Fire. We express our inner Fire through creative energy, passion, drive or will. As the most masculine element, fire also symbolizes the male libido. Our singer may love his woman as he exclaims, but it’s clearly coming from a place other than the more romantic and sensitive element, Water.

As an interesting little synchronicity, notice that the recording is pretty sloppy. The double-tracked vocals don’t match at the 1:14 mark, as John sang two different lyrics that were mashed together. Now think of the nature of fire. A flame never appears exactly the same; its movement is constant, unsteady, and unpredictable. Of course a song symbolizing fire in the extreme would display a characteristic of flame. It’s wonderfully perfect in its imperfection!

Larry Williams released “Slow Down” as the flip side to “Dizzy Miss Lizzie”. For John Lennon and the Beatles, they were two sides of the same coin. They represented two variations on the same hyper-aggressive, macho theme.

“Well you know that I love you, tell the world I do

Come on, pretty baby, why can’t you be true?

I need your lovin’ baby, oh so bad

The best little woman I ever had.”

This is song #36 of the Beatles Song Tarot Project. Click here to learn more about this magical, mystical trip through the Beatles catalogue.