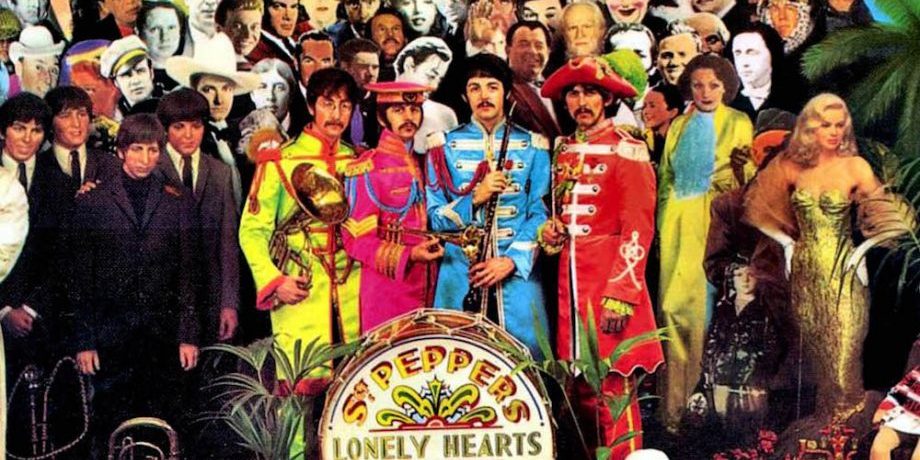 Sgt. Pepper: The Beatles’ most notorious record and arguably the greatest album ever made! Released in the Summer of Love, it broke the mold for what was possible from a rock band. It is the perfect infusion of pop and art. Just look at the album cover and release your expectations of what the Beatles once were. This new band have thrown away their dark suits and replaced them with technicolor military uniforms. They are holding brass and woodwind instruments instead of the typical rock guitars, bass, and drums. They’ve even grown mustaches! Who are these turned-on prophets of the Aquarian Age?

The title track introduces us to the Beatles’ alter-egos, “Sgt. Pepper Lonely Hearts Club Band.” The first sounds we hear are not music, but instead a crowd gathering and the tuning of instruments. Clearly this is not going to be a typical album! Sgt. Pepper gets credit as the first concept album in rock history, and the first song cleverly sets the stage.

The first and last verses feature a master of ceremonies introducing the band. It creates the effect of an old vaudeville show. Vaudeville was a popular form of live entertainment in the 19th and early 20th centuries, where audiences were treated to a variety of live acts that included music, dance, comedy, and magic. The Sgt. Pepper band takes the stage and greets the crowd in the song’s chorus and bridge.

This album represents the peak of the Beatles’ creative and cultural powers. Like magicians, they dazzled with each new mind-blowing release. It’s ironic that “Sgt. Pepper” would intimate a live show since the band had quit touring a year earlier. They knew the only way to continue growing artistically was to devote more time creating in the studio with producer George Martin, a wizard in his own right. The tarot’s Magician is a master of will and energy. He’s dialed in to his innermost resources to manifest what he desires. When we think of magicians we think of tricks. But true magic is more than mere illusion. It is the ability to tap in to our innate abilities to accomplish true feats of skill. A Magician is a virtuoso, conjurer, and channel for divine will, much as the Beatles were in 1967.

On most versions of this card we see the Magician at his work station, with symbols of all four elements at his disposal. He possesses an uncanny ability to manipulate the forces of Air (thought and word), Water (emotion and spiritual connection), Fire (will and creative inspiration), and Earth (manifesting power). Through focus and determination, he unleashes his infinite potential.

We are all Magicians, at least potentially. When you get this card be inspired into action. Do what you do well and do it as only you can. Work your magic!

We hope you will enjoy the show

Sit back and let the evening go”

This is song #14 of the Beatles Song Tarot Project. Click here to learn more about this magical, mystical trip through the Beatles catalogue. Scroll down to see song #15, Sgt Pepper’s Lonely Hearts Club Band (Reprise).

In the two years leading up to Sgt Pepper, the Beatles grew creatively by leaps and bounds. There is an undeniable progression from Rubber Soul, to Revolver, and the Strawberry Fields Forever/Penny Lane single. The Beatles had developed to such an extent that by the time Sgt. Pepper was created they’d even outgrown their very identities. Only by shedding their moptop image could they transcend what was previously possible, for them as a band and for rock music more generally.

Credit goes to Paul for the idea of the first concept album in rock history. Although rock concept albums would become much more plot-driven (and often over-stuffed) in later years, the conceit of this first one was subtle and artfully delivered. Unlike those records that would come later, Sgt Pepper doesn’t have a story per se. Rather, the concept is that we are listening to a vaudeville act put on by a group formerly known as the Beatles. The Sgt Pepper theme song is shrewdly brought back at the end of the album, which strengthens the concept overall. The Sgt. Pepper Band took the stage when we first heard the song, and with the reprise they take their bow. The tempo has been sped up and our performers say thank you and goodnight before offering an encore in the album’s grand finale, “A Day In The Life.”

The influence of the Sgt. Pepper album cannot be overstated. The Beatles were already the greatest cultural force in the world, and this was their magnum opus. To mark the occasion, the band elected to make a splashy artistic statement with the album cover. Working with art direction from Jann Haworth and Peter Blake, they present themselves amongst luminaries past and present. We can spot such cultural giants as Edgar Allan Poe, Albert Einstein, Carl Jung, James Joyce, Marilyn Monroe, and even the previous version of themselves, shown as wax figurines. The Beatles have moved on and joined the greats of their time, but only as alternative versions of themselves.

The great magic of Sgt. Pepper is that it is the clarion call of a New Age. Gone were the old days of innocence and the moptop image of the Fab Four. Along with their generation, the Beatles crossed the Rubicon, and there would be no turning back.