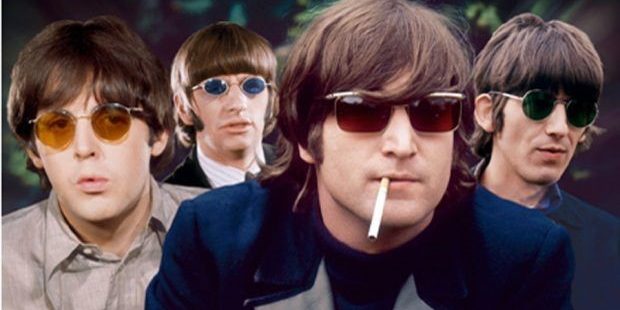 “Rain” is the song that heralded the beginning of the Beatles’ psychedelic period. It was recorded during sessions for the Revolver album and released as the B-side to Paul’s “Paperback Writer”. This song was written by John and includes some spectacular drumming by Ringo and inspired bass from Paul. “Rain” sounds like nothing the Beatles had ever recorded before. Fans expecting more of the softer, more graceful aesthetic of Rubber Soul were surely perplexed by what they heard here.

From this point on, the Beatles – aided by producer George Martin and engineer Geoff Emerick – really began to pioneer all kinds of exhilarating innovations in their recordings. For “Rain” they performed multiple studio tricks to alter the sound of John’s voice and the instruments. The most radical of these techniques was to include backwards lyrics and sound effects, the first time this was done in popular music. John later claimed he discovered this by accidentally threading the tape backward at his home studio while stoned. The band continued to expand on these sonic explorations throughout the next couple years, notably with “Tomorrow Never Knows”, “Strawberry Fields Forever”, and the Sgt. Pepper album.

At first glance, the lyrics of “Rain” are about how people concern themselves too much with the weather. But the weather is meant as a symbol for people’s attitudes toward all of life’s trivial struggles. We have good days and bad days; sometimes it rains and sometimes it shines. The message John conveys in the song is that these are judgments, and merely states of mind. When seen from a higher perspective – rain or shine – the weather’s always fine. 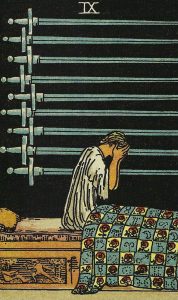 This was a very heady time for Lennon and the Beatles. In 1966 they were all experimenting with mind-expanding psychedelics, and John especially was leading the way. With the lines, “I can show you” and “Can you hear me”, he’s appealing directly to their fans, telling them he’s discovered a new way of thinking. He’s saying that we can live without so much worry about the trivial stresses in life by first opening, and then harnessing, the power of our minds.

The 9 of Swords is the tarot card that best correlates to “Rain”. This card symbolizes issues of stress and worry. Many versions of the 9 of Swords picture someone lying awake in bed at night, unable to sleep because of obsessive thoughts, regrets, or fears. When you pull this card, consider what has you stressed out. Is the situation really so bad or more a matter of perspective? Could it be your anxiety that’s making the situation worse? Remember that rain or shine is just a state of mind.

The 9 of Swords is the right card for “Rain” on another level. While this card can signify the negatives of exerting lots of mental energy, it can also symbolize the positives too. Just listen to the song “Rain” and appreciate the profound innovations of the entire Beatles’ psychedelic period. Clearly they showed us the astonishing creative potential of going deep within one’s mind.

“Can you hear me

That when it rains and shines

It’s just a state of mind

Can you hear me?”

This is song #44 of the Beatles Song Tarot Project. Click here to learn more about this magical, mystical trip through the Beatles catalogue.