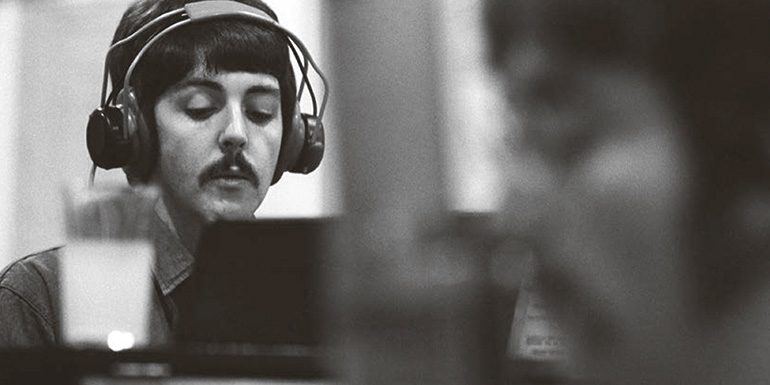 “Lovely Rita” is a playful little song – sung by Paul – describing a fling with a traffic warden, also known as a meter maid. In the first verse he describes what attracts his attention: She looks sexy in her little hat, bag, and uniform. He spots her and asks her for a date.

Paul wants to know when Rita is free to “take some tea”. This is a sly double entendre: on the surface it’s simply enjoying each other’s company over a hot beverage. But “take some tea” was also a slang term for smoking pot, and this was the Summer of Love. It isn’t hard to imagine the singer has more in mind than a cup of chamomile.

We find out how the date goes in the second verse. He takes her out, they have a good time. They’re young, hip and stylish; they’re so progressive that Rita even pays the bill. Finally it’s back to his place where they nearly “make it”, and there are other women there too. The memory ends with no more words than “oooohhhhhh!”

The song’s sentiment is playful and light-hearted, nicely reflected in the piano solo before the second verse. It was 1967: an uninhibited time of fun, experimentation with drugs, and open sexuality. Hang ups against these activities were for squares. But for the enlightened avant-garde, during the time of Sgt Pepper it was all to be celebrated! The Knight of Cups is a good fit for this song because it fittingly describes the singer of the song. He’s amorous, with far more passion than we saw with the Page of Cups. The Knight wines and dines you, then takes you to bed. He sweeps you off your feet, which is cleverly expressed to Rita in the opening lines of the song with “when it gets dark I tow your heart away.”

The Knight of Cups is also artistic, idealistic, and free spirited, consistent with the spirit of the song and the open-minded era of Sgt Pepper. To best appreciate “Lovely Rita”, listen with quality headphones. Notice the psychedelic instrumentation and voice effects happening in the background. Especially during the song’s final 30 seconds, we hear the Beatles – aided by master producer George Martin – paint an audio canvas of vibrant kaleidoscopic color.

“Took her out and tried to win her

Had a laugh and over dinner

Told her I would really like to see her again”

This is song #9 of the Beatles Song Tarot Project. Click here to learn more about this magical, mystical trip through the Beatles catalogue.