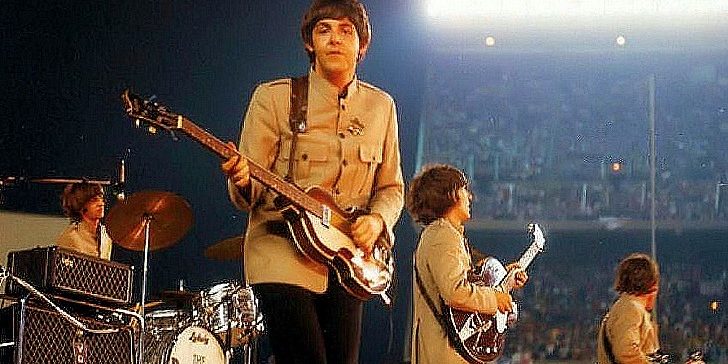 This B-side to the smash single “Help!” became a raucous staple of The Beatles’ live act. Little Richard is a clear influence, and “I’m Down” could be seen as a sequel to a Paul-sung favorite, “Long Tall Sally“. Like “Long Tall Sally” before it, “I’m Down” was loads of fun to perform on stage and would often serve as a frenetic finale to Beatles concerts. The band would whip themselves and the crowd into a frenzy before taking their bows and calling it a night.

The song sounds fun, but the title and lyrics suggest anything but. The singer is overcome with frustration over how his lover is treating him. She lies to him, laughs at him, and turns away his advances. He’s fed up and just can’t take it anymore!

The tarot’s four #8 cards signify something being repeated over and over again. (Notice an 8 turned on its side is an infinity symbol.) The suit of Swords relates to the mental realm: ideas, thoughts, and messages. Therefore, the 8 of Swords generally symbolizes feeling trapped within some kind of thought pattern. What message are you telling yourself repeatedly that’s keeping you stuck? 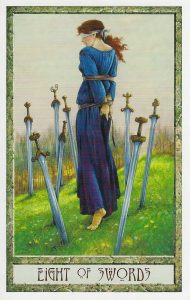 The full final minute of “I’m Down” is basically Paul repeating the same line over and over again, with increasing fury and irritation, with John and George repeating it back to him. This reinforces the 8 of Swords as the best match for “I’m Down.” The studio version of the song fades out, as if the singer vents his outrage off into infinity.

We all fall into a mental trap sometimes. These are the problems we make worse by obsessing over them. We repeat the same message to ourselves over and over again, like a hamster wheel turning around and around inside our heads. The 8 of Swords often shows a person who is blindfolded and tied up. This signifies being blinded and trapped by our own thinking. We won’t be able to change the situation until we stop focusing on the problem.

The key to a situation like this is to stop obsessing and take control of your perspective. Look deeply within, to the truth of your heart. This will allow you to take that blindfold off and then loosen those binds. Listening to “I’m Down” you have to ask: if you’re being so mistreated, why not just dump her? Maybe he’s so busy complaining he hasn’t yet seen the solution really is that simple.

“We’re all alone and there’s nobody else

You still moan, ‘Keep your hands to yourself!’

Oh baby I’m down (Down on the ground)”

This is song #12 of the Beatles Song Tarot Project. Click here to learn more about this magical, mystical trip through the Beatles catalogue.(Scroll down for a live version of “I’m Down”.)