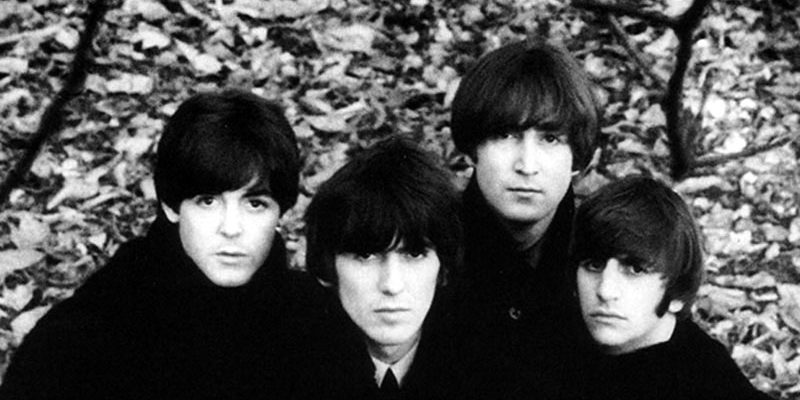 “I Don’t Want to Spoil the Party” is yet another downbeat song off the Beatles’ fourth album, Beatles for Sale. It’s a country and western song, written primarily by John with help from Paul, that is nicely enhanced by George’s Carl Perkins-influenced guitar solo. The track also served as the B-side for the “Eight Days a Week” single but fits very nicely with the overall vibe of the Fab Four’s most melancholy and subdued LP.

As the Beatles’ country music enthusiast, Ringo would have been a good choice to sing “I Don’t Want to Spoil the Party”. But John took the lead vocal duties himself because, as he said years later, it was a “highly personal song”. He didn’t elaborate, but we can assume the song is based on a true story. Its lyrics describe the disappointment the singer is feeling after a girlfriend has stood him up at a party. He’s decided to go out looking for her rather than remain and be a downer for everyone else.

Disappointment is a primary theme of the tarot’s 5 of Cups. The Waite Smith version of this card shows a figure wearing a black cloak, symbolizing being enveloped in dark feelings of sadness or even depression. The figure looks down at a set of three cups that have spilled over while two cups remain upright behind them, out of their field of vision. This imagery represents focusing on the negative, even though there is some positive way to see the situation if we expand our view a bit. 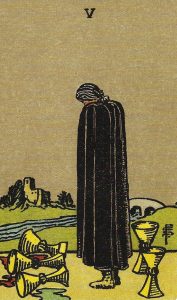 The song’s structure displays the contrasting ways of dealing with disappointment. In the verses the singer is cloaked in the negative. His words are self-pitying, and the notes cascade downward at the end of his phrases. Meanwhile, the harmony, which is double tracked by Lennon, is noticeably low in his vocal register. He’s feeling low. In the song’s bridge sections, however, we hear the singer’s mood perk up. The harmony here is noticeably higher and sung by Paul. In these sections the singer expresses that he’s determined to go out and find her, and imagines the happiness he’ll feel once he does. He’s feeling better because he’s decided to light a candle instead of cursing the darkness (and ruining the party for everyone else).

When we look closely at the 5 of Cups, we see there’s a bridge over a turbulent river, symbolizing that there’s a way to get over the difficult emotions being experienced. When we draw the 5 of Cups we may be reminded that the way to find that bridge is to first expand our view to see the two cups that remain upright. All is not lost; there’s hope if we can find it. This isn’t easy to do when we’re cloaked in dark feelings and obsessed with the three cups spilled in front of us. The singer of “I Don’t Want to Spoil the Party” has found his way over the bridge: he imagines his girl will be on the other side and has decided to go find her.

“I think I’ll take a walk and look for her

Though tonight she’s made me sad

I still love her

If I find her I’ll be glad

I still love her.”

This is song #84 of the Beatles Song Tarot Project. Click here to learn more about this magical, mystical trip through the Beatles catalogue.