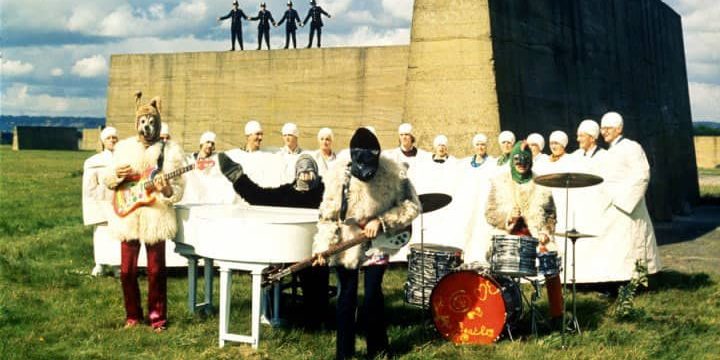 Magical Mystery Tour was the peak of the Beatles’ psychedelic period, and John’s song “I Am the Walrus” in particular is the culmination of this groundbreaking era. It’s a hallucinatory masterpiece.

The esoteric lyrics are a cross between Lewis Carroll and Bob Dylan. They’re hard to decipher on the surface but look closely. Along with the surreal imagery are criticisms of what’s wrong with square, traditional society. Corporation T-shirts, pollution, and spiteful critics are some of the targets for John’s disdain. The song is essentially a cloaked manifesto for dropping out of oppressive, soul-crushing modern society.

Psychedelics like LSD take us deep within our subconscious; the further in we go, the weirder the experience becomes. We may find ourselves sitting on a cornflake, watching policemen fly, or feeling like eggmen. Meanwhile, our sense of union with other people and the entire world increases as well. John’s opening lines to “I Am the Walrus” indicate the barriers of ego have broken down and he feels at one with all: “I am he as you are he as you are me and we are all together.” 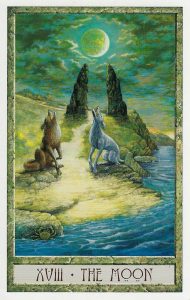 The Beatles would soon explore different methods for going within that are less intense than psychedelics. Meditation, yoga, and tarot are examples of intuitive methods that awaken us to deeper levels of consciousness. They are far safer and less severe than an LSD trip, but they take a lot more practice and discipline to be nearly as effective. A key benefit is that they allow our ego to integrate the truths we access from within for more sustainable and long-lasting growth.

The Moon is symbolic of the subconscious. The imagery on this card illustrates the strange world that lies deep inside of ourselves, revealed in mystic visions or dreams. The shellfish emerging from the deep waters represents our most hidden thoughts and emotions coming into consciousness. The wolves represent our deep fears and animal instincts. The mysterious path ahead suggests uncertainty for the future, which results from making the subconscious conscious.

Getting the Moon card in a reading is an invitation to go within and discover the strange world of your subconscious. It also warns of the illusions and fears you can expect to encounter there.

Pretty little policemen in a row

See how they fly

See how they run

This is song #18 of the Beatles Song Tarot Project. Click here to learn more about this magical, mystical trip through the Beatles catalogue.