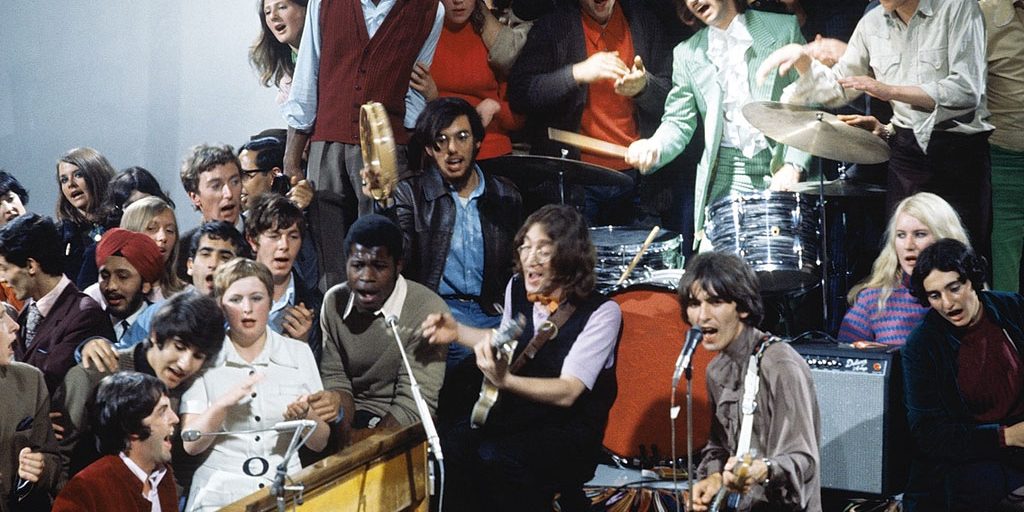 Paul wrote “Hey Jude” as a comforting message for John’s five-year-old son Julian, who was experiencing the separation of his parents. It was originally called “Hey Jules” but Paul changed the name to Jude because he felt it sounded better. It was the band’s most successful single; it spent nineteen weeks on the Billboard charts, with nine at the #1 spot. At over seven minutes it was easily the longest song to ever reach the top of the charts. Its extended coda is one of the most famous melodies in popular music history, and forever influenced what a best-selling song could be. “Hey Jude” is consistently included in critics lists of the greatest songs of all time.

The Beatles’ most epic single is about what could safely be described as the group’s most everlasting legacy: the power of love. Although there are multiple cards in the tarot deck that concern love, the best fit for “Hey Jude” is Temperance. As one of the deck’s 22 major arcana cards, it symbolizes a primary theme in the life experience. For those new to tarot, the word “Temperance” may be a bit misleading. The essential nature of this card is the process of healing through love. In some decks this card is called “Art” or “Alchemy”, titles that suggest opening one’s heart and integrating the deep inner forces found there. 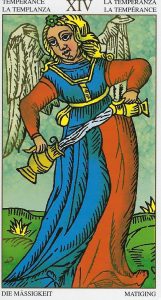 We can better understand the Temperance card by looking at where it lies in the sequence of the major arcana. Temperance is card #14, coming after #13 Death, the card which symbolizes the end of some important period of life. In the context of “Hey Jude” the Death card represents what young Julian was going through with his parents’ divorce; the family as he always knew it was dying. In his love for John’s son, Paul is wishing to move Julian out of his frightening “Death” experience into the place of recovery and peace that Temperance represents. It’s fitting that many versions of Temperance show an angel of healing; it is the source of deep love we all possess inside ourselves.

Listening to “Hey Jude”, we get a sense of love’s profound healing power as the song reaches its climax. The final verse has an added harmony from John, suggesting the state of inner harmony when connected to the source of healing within. This verse concludes with the word “better” repeated six times, each higher and higher, a crescendo toward a final scream of transcendence. This is the ecstatic moment of realizing divine love. We are healed!

The coda acts as a mantra. All fear and pain are gone; we are now at one with the boundless source of love within our hearts. No words are needed, just na-na-na as a language of the heart. At over four minutes it goes on longer than the regular part of the song, with Paul’s euphoric scatting and screaming serving as expressions of unadulterated outpourings of love.

Many of us have heard “Hey Jude” so many times that perhaps it’s lost some of its magic. If that’s true for you, I invite you to listen with fresh ears, turn it up, and sing along with the coda. Don’t just sing it; feel it. And never forget this healing power of love is available to you always.

You’re waiting for someone to perform with

And don’t you know that it’s just you,

The movement you need is on your shoulder”

This is song #46 of the Beatles Song Tarot Project. Click here to learn more about this magical, mystical trip through the Beatles catalogue.