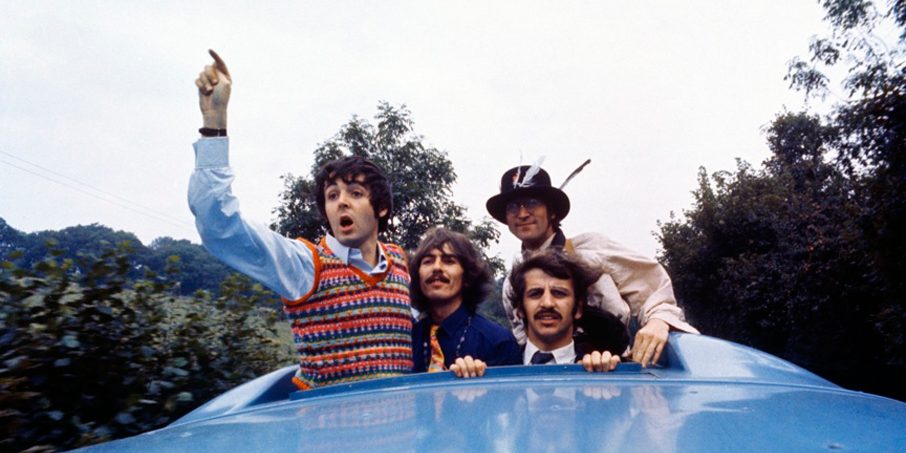 “Flying” is unique in the Beatles’ canon. It is the only instrumental the group ever released, and it’s one of just two Beatles compositions that gave all four members equal writing credit.

The song is off the soundtrack to their psychedelic third film, Magical Mystery Tour. The film shows the Beatles on an unplanned excursion by bus across the English countryside, accompanied by freaks of all kinds, looking for adventure.  Clearly they were inspired by the infamous madcap antics of Ken Kesey and the Merry Pranksters.

Although perhaps the least memorable of the songs off Magical Mystery Tour, “Flying” could be appreciated as a symbol for the Beatles’ ethos at the time. The group were experimenting with ever-expanding musical styles, philosophies, and mind-altering substances. No longer hemmed in by the demands of touring, the band could do whatever they wanted. The Beatles of 1967 enjoyed tremendous freedom and were flying to all kinds of new dimensions. 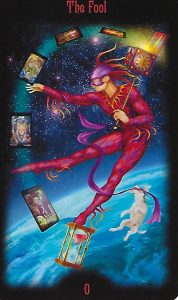 The Fool is a perfect fit because it’s the card that best represents freedom. As card #0, the Fool symbolizes a lack of responsibility, ego, expectation, or anything else that might impede the pure expression of spirit. This card represents play, impulse, adventure, and yes, foolishness. The Fool corresponds to the element Air, floating free of any restriction. It’s unfortunate the Beatles edited “Flying” from its initial longer version. The original was an even better portrayal of floating aimlessly through the air.

It’s common to read the Fool as the card of “new beginnings”. While this is an adequate interpretation most of the time, I invite you to take a moment to dig a little deeper. As it relates to any “new beginning” – a job, travel, whatever – think about the brief magical moment before you’ve actually begun. Before you’ve placed any expectations or plans on that new beginning. There’s a moment of unadulterated freedom and possibility. It is a magical state of purity, a spiritual place that is hard to put into words. (And remember that “Flying” is the only Beatles song without words; just chanting.)

The next time you get the Fool in a reading, you’re encouraged to see it as more than a “new beginning”. Rather, approach this card as an invitation to experience the pure state of freedom. You may feel like you’re flying, all barriers removed, content in the magical state of the here and now.

This is song #33 of the Beatles Song Tarot Project. Click here to learn more about this magical, mystical trip through the Beatles catalogue.