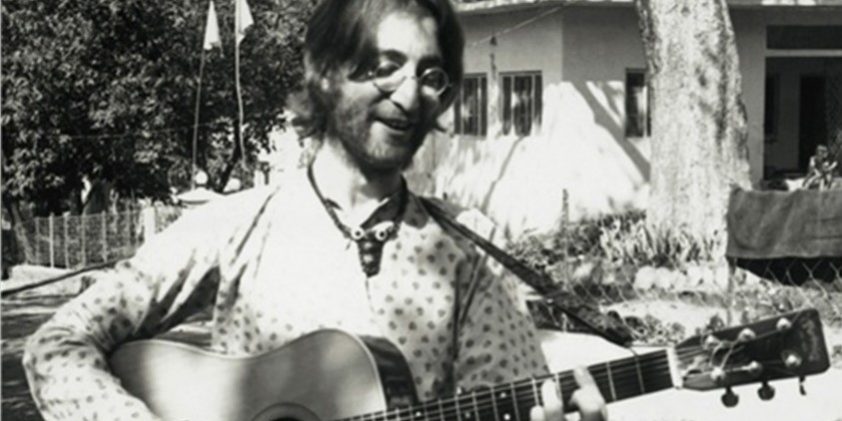 The Beatles wrote most of the White Album while on spiritual retreat in India, learning Transcendental Meditation from the Maharishi Mahesh Yogi. The band was excited by the prospect of learning a method for going deep within for self-exploration and enlightenment.

It was undoubtedly a time of spiritual seeking, for the Beatles and for many in the West. John, Paul, George, and Ringo had spent the past couple years experimenting with mind-altering drugs, particularly LSD. Their minds had been blown open and now they were ready to explore new mystical methods, especially those for looking deep within. Led by George Harrison, the band sought purer methods for accessing the inner light than psychedelic drugs. Eastern meditative methods provided an ideal opportunity for transcendence. 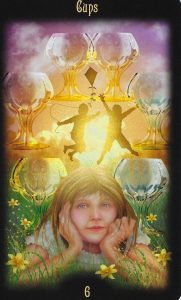 The four Beatles were accompanied to India by dozens of others, including folk singer Donovan, Mike Love from the Beach Boys, and actress Mia Farrow. Among the group was Mia’s sister, Prudence. She took her meditation training to extremes, often disappearing into seclusion for days at a time. There was growing concern that she was getting too lost within herself and could use some coaxing out of her shell. The song “Dear Prudence” is John’s invitation to rejoin the group, enjoy the beauty that surrounded them at the retreat, and end the isolation that was causing her darkness and confusion.

The 6 of Cups is the tarot card related to innocence, purity, and joy. It is childlike wonder, sentimentality, and nostalgia. Prudence had meditated so intensely that she got lost in darkness within herself. John’s lyrics encourage her to come out and play, to smile like a “little child” and to feel joy again.

We all get lost within ourselves sometimes, and this isolation can lead to darkness. For many of us, it’s the many responsibilities and endless distractions of adult life that cause stress. When we get stuck inside ourselves, the cure is to get back to feeling joy again. How? Simplify. Come out to play. Return to the pure and simple pleasures, as if we were children again. The world is beautiful, and so are we. Look around; see it, feel it.

The clouds will be a daisy chain

So let me see you smile again

Dear Prudence, won’t you let me see you smile?”

This is song #8 of the Beatles Song Tarot Project. Click here to learn more about this magical, mystical trip through the Beatles catalogue.