Choosing Your Next Tarot Deck 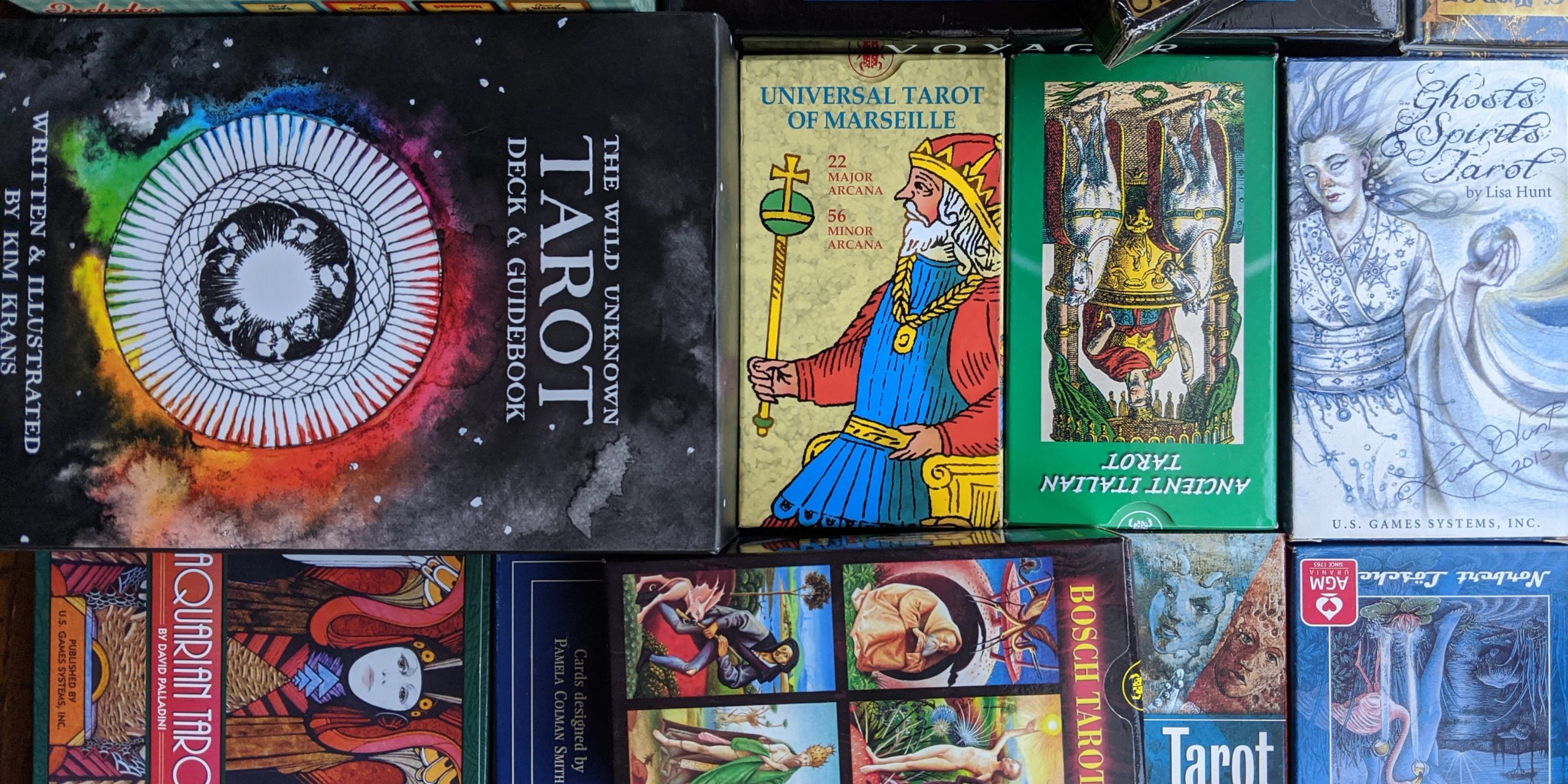 A new deck is one of the most exciting purchases a tarot user ever makes. Locked within the cardboard box is a magical world of discovery and opportunity. It’s fun researching and buying new decks, which is probably why so many of us tarot people have so many of them!

How do you choose your first deck? And once you’ve gotten comfortable with your first, how do you expand to others?

Any deck purchase is special, but your first one is uniquely memorable. As the saying goes, you never forget your first. But don’t put any pressure on yourself. Enjoy the process of choosing your first deck because you have so much to look forward to. As with everything in tarot, do it with patience and love and you will be rewarded.

So how do you choose? It’s a personal choice, and there are many good choices. Go to your local bookstore or New Age shop and see what they offer. Look closely at the decks and hold them in your hands. Listen to your intuition. Do you feel attracted to the imagery and themes of the deck? Does it feel like something that you will connect with? Do you sense it has something to say?

You may also want to do some research online. An excellent resource is aeclectic.net. They offer pictures and reviews of just about every deck that’s ever been created, and they also have a section specifically for beginners. Of course there’s always Amazon too. When I first decided to get a tarot deck I didn’t know what to choose. Someone suggested I just look at as many decks as I could until I found one that “spoke to me”. After a couple weeks I came across a box called the Beginners Tarot Kit that included two decks. I didn’t know anything about them at the time, and they looked good to me, so I bought the kit.

Those decks were the Rider Waite Smith (or “RWS” for short) and Thoth Tarot, both classics. Knowing what I know now, I highly recommend the RWS for the beginner, while the Thoth is a bit more of an advanced deck. Please read on for further recommendations.

Enjoy the process of choosing your first deck and don’t put any pressure on your decision. You’re going to discover some decks “speak to you” while others have little to say. When it comes down to it, the best deck is the one that brings about the greatest intuition in you.

As you become ready to branch out beyond your first deck, you’ll feel an unmistakable itch to discover something new. The choices are endless, so how do you choose?

The RWS is a must-have for almost any tarot practitioner and excellent for a newcomer. Created by Arthur Edward Waite and Pamela Coleman Smith, it is the most recognized and influential deck in tarot today. Also known as the Rider Waite, Waite Smith, or just the Rider deck, it was originally published in 1909. It is currently available in numerous versions, including borderless, as shown below. The RWS is generally considered the original modern tarot deck, and its influence cannot be overstated. Countless decks that have been created since draw its influence directly to this masterful tarot vision. The main difference is the artistic style the creators of these decks brought to the images.

Many of these decks are very popular, and are suitable for a beginner as well. Or, if you have experience in the RWS tradition and don’t care to stray too far from its interpretations for the 78 cards, these decks are excellent choices. Some include: Morgan Greer Tarot, Hanson Roberts Tarot, Universal Tarot, and Gilded Tarot. Expanding on the Waite-Smith Tradition

Many decks in the RWS tradition offer a much different style, while still not straying too far from that deck’s 78 interpretations. Some artists have a lot of fun with these, and may be designed for a niche market. Examples include the Housewives Tarot, Steampunk Tarot, and Zombie Tarot.

These kinds of decks are recommended for the more adventurous tarot newcomer. Or they all make outstanding choices for those looking to branch out from their initial deck. Some popular choices that I personally like include: Legacy of the Divine Tarot, Druid Craft Tarot, and Sun and Moon Tarot. As influential as the Rider Waite Smith has been over the past 100 years or so, it is relatively new compared to the oldest decks, which go back as far as the mid-15th Century. Historical and old-style decks bring you back to tarot’s roots.

These decks generally use pips to represent the minor arcana (or numbered cards). This makes them a great way for experienced tarot practitioners to disconnect from the accepted interpretations we see in modern tarot decks. The downside, especially for newcomers, is that they are likely to be more challenging to use. Some recommended choices include: Visconti-Sforza, Sola Busca, Universal Marseille, and Ancient Italian Tarot. It’s fun to explore decks that take tarot in exciting new directions. Some deck creators retain tarot’s 78-card structure, but present refreshingly bold visions. Whether these decks should be used by a beginner varies from deck to deck. My suggestion is if you feel particularly drawn to one one of these decks, it’s likely a good fit for you. Trust your intuition.

Some of these bold visions in tarot include, but are far from limited to: Thoth Tarot, Voyager Tarot, Osho Zen Tarot, Mary-El Tarot, and Wild Unknown Tarot. This is a very exciting time for tarot because more artists are taking greater risks and pushing the boundaries. Have fun exploring! An emerging source for decks that are not produced by a major publisher is Kickstarter. These indie decks are usually a bit more expensive than the mass-produced ones but the quality and creativity often make them worth it.

Keep in mind that there’s nothing wrong with sticking with just one deck for a long time. I used that original Waite-Smith deck almost exclusively for my first few years. But don’t be surprised when you experience a pull toward trying something new. And the next thing you know, you might have 20, 50, or 100 more of them, each competing for your attention!