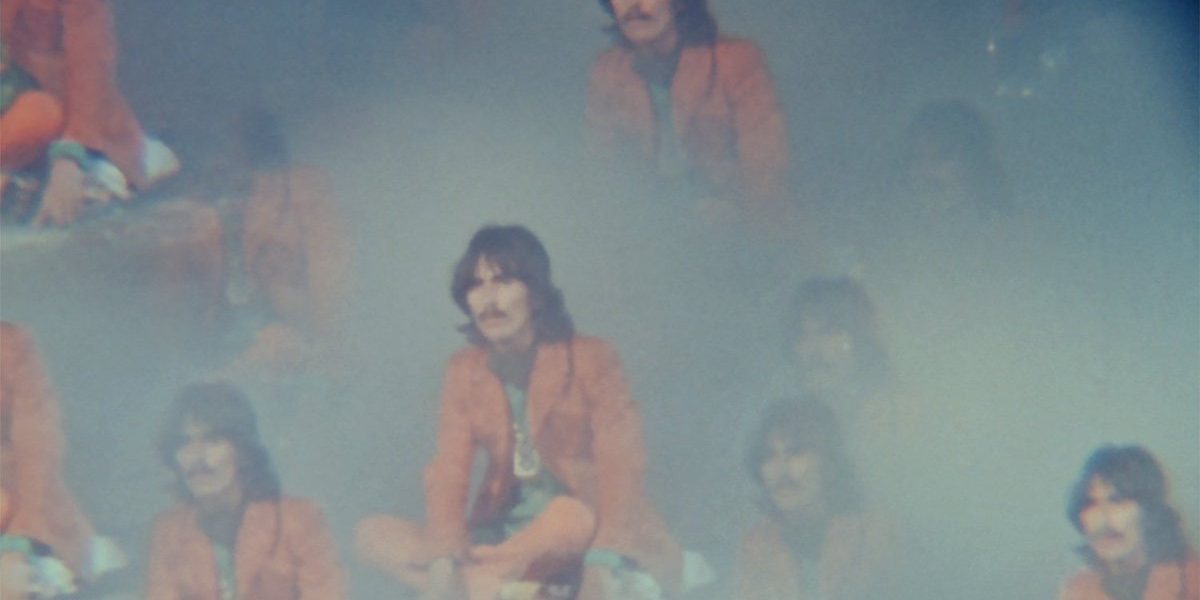 Depending on personal taste, “Blue Jay Way” could be described as a psychedelic masterpiece or one of the most dreary songs in the Beatles’ catalogue. The song was George Harrison’s contribution to the Magical Mystery Tour movie and album, released at the end of 1967. As was typical of George’s compositions during that era, “Blue Jay Way” was influenced by his fascination with Indian music. And as was typical of Beatles recordings at that time, atmospheric flourishes were liberally added in the studio, such as a hypnotic cello accompaniment, and backwards audio effects.

The song’s title comes from the name of the street where George had rented a house in the Hollywood Hills area of Los Angeles. He and his companions were feeling tired after arriving from London and were waiting for some friends to arrive who’d gotten lost. It was growing late, so to pass the time George began to fiddle with the Hammond organ that was there. By the time the friends finally found the house a couple hours later, the song was nearly completely written.

The 7 of Cups is the corresponding tarot card for “Blue Jay Way”. One way of interpreting this card is that it symbolizes searching within the depths of our subconscious. The card’s upside is engaging deeply with one’s feelings and the highly imaginative thinking that may result. But its significant downside includes the effects of too much navel gazing, such as delusional thinking, a sense of aimlessness or discontentment, and the trappings of ennui. We hear the positive and negative expressions of this card in “Blue Jay Way”: George was bored waiting for his friends to arrive, so he composed a hypnotic, hallucinatory song that effectively expressed his discontented boredom. The aimless coda, where we hear the line “don’t be long” 21 times, takes up nearly half the song! 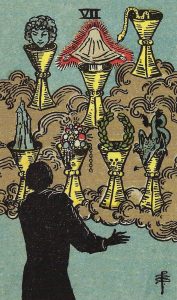 Meanwhile, the 7 of Cups also serves more broadly as a fitting signifier for the Beatles at this time in their history. Magical Mystery Tour represents the latter part of the Beatles’ psychedelic period. Consistent with the 7 of Cups, they’d devoted much of the previous couple years going deep within themselves. Their two previous albums – Revolver and Sgt. Pepper – were unquestioned masterpieces, each incredibly inspired, imaginative, and influential. But Magical Mystery Tour was where we start to hear the diminishing returns of psychedelia. If Revolver and Sgt. Pepper were positive expressions of the 7 of Cups, we might see Magical Mystery Tour as where more of the negatives show themselves. Not coincidentally, it was the first time the Beatles received widely critical reviews, and it happened to come shortly after the death of their beloved manager Brian Epstein from a drug overdose.

Meanwhile, George personally experienced the darker side of mysticism on that trip to California. Days after composing “Blue Jay Way”, he made a pilgrimage to the Haight-Ashbury district of San Francisco, excited to find a utopian community of creatives and artists. He was disappointed to find instead a place filled with stoned degenerates, aimlessly searching for some kind of spiritual direction. Here we’re reminded that the traditional Golden Dawn keyword for the 7 of Cups is “debauch”, defined as morally corrupt and excessively pleasure-seeking.

“Blue Jay Way” describes a time when George’s friends were lost but perhaps it reflects a time when George was feeling pretty lost himself. The Haight-Ashbury incident proved a turning point for him personally and the Beatles as a group; almost immediately afterward they swore off drugs and vowed to reach higher states of consciousness through natural means such as Transcendental Meditation.

And my friends have lost their way

We’ll be over soon they said

Now they’ve lost themselves instead.”

This is song #69 of the Beatles Song Tarot Project. Click here to learn more about this magical, mystical trip through the Beatles catalogue.

* (In the video below, notice how the fog that envelopes George looks a lot like the clouds that surround the figure in the 7 of Cups. It gets so thick by the 2:35 mark that he’s compelled to wave it away.)