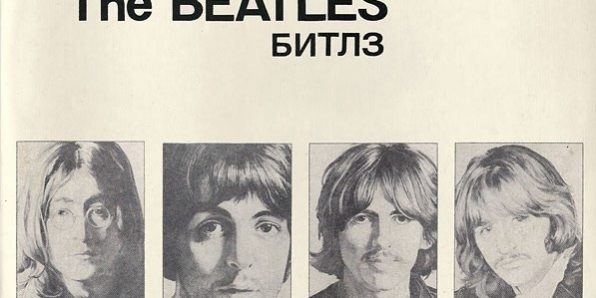 The White Album opens with sounds of an airplane engine followed by an uptempo drum and guitar beat. “Back in the U.S.S.R.” is a raucous pastiche of Chuck Berry and the Beach Boys. The song’s title is lifted directly from Berry’s 1959 song “Back in the USA”, which was a celebration of returning to America after being away on tour. Here, the Beatles sing from the perspective of a Russian, happy to be home after a dreadful trip to America.

Perhaps not surprisingly, there was some controversy around the song. The Cold War was raging at the time, and America was deeply embroiled in the Vietnam War. To some, “Back in the U.S.S.R.” appeared to be a celebration of the West’s arch enemy and communism. Some conservatives complained that those hippy Beatles were subverting American freedom by praising everything we were against. The lyric “You don’t know how lucky you are boys” was seen as an especially pointed attack on our way of life.

To my ears, however, and most people at the time the song just sounds like the Beatles were having some fun.

The harmonies of “Back in the U.S.S.R.” are very much in the Beach Boys’ style. The song was written by Paul while in India with the other Beatles learning meditation from the Maharishi. Beach Boy Mike Love was also there, and offered some suggestions when Paul sang him an early version. The final result is a spoof of the Beach Boys’ hit “California Girls”, but with the narrator celebrating his home in the Soviet Union. 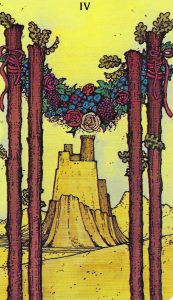 This song is ultimately a celebration of returning home. That is a primary theme of the tarot’s 4 of Wands. Although we grow by going on adventures and visiting new places – themes for the 3 of Wands – it feels good to return home, where we feel most comfortable and at ease with ourselves. Whereas the 3 is expansion, the 4 is returning to more familiar ground. One result of traveling and experiencing other cultures is gaining a better appreciation for where we come from.

When you draw the 4 of Wands, appreciate who you are and celebrate your home, including the family and friends you share it with. Give thanks for the blessings in your life and the peace you feel within yourself.

“Been away so long I hardly knew the place

Gee it’s good to be back home

Leave it till tomorrow to unpack my case

This is song #17 of the Beatles Song Tarot Project. Click here to learn more about this magical, mystical trip through the Beatles catalogue.