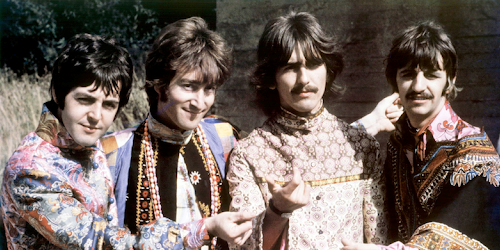 “Baby You’re a Rich Man” is typical psychedelic-era Beatles; it has mystical lyrics and features an exotic, Indian-flavored arrangement. Its meandering instrumental introduction was made with a clavioline, a precursor to the synthesizer. The song was released as a B-side to the smash single “All You Need is Love”, and later appeared on the Magical Mystery Tour album and the Yellow Submarine movie. The song was a combination of two unfinished pieces; Paul came up with the chorus, and the verses were from a song John was working on called “One of the Beautiful People.” A primary theme running throughout the Beatles psychedelic period is freedom. And freedom is the primary characteristic that both types of “beautiful people” share. Those with lots of financial security are free to do whatever they want to do. And, conversely, those beautiful people who have chosen the spiritual path of love, and have rejected money and material pursuits, are free to be what they want to be. Notice they represent two contrasting types of freedom. Either way, it is the issue of material wealth – possessing lots of it or rejection of it – that is the source for being free.

The tarot’s 9 of Pentacles is related to themes around wealth, financial independence, and their relationship to freedom. When this card appears you may ask yourself, “what is living the ‘good life’ to me? Does it include having lots of money, possessions, and influence?” Do you want so much money you can “keep it in a big brown bag, inside a zoo?” If so, you’ll certainly have one kind of freedom.

Or is your “good life” something more modest? If so, you may be seeking the kind of freedom that only comes with less money, not more. In choosing the spiritual path of love, you’re a “rich man too”. You’ve found another key, so what are you going to play?

“How does it feel to be

One of the beautiful people?

Now that you know who you are

What do you want to be?”

This is song #37 of the Beatles Song Tarot Project. Click here to learn more about this magical, mystical trip through the Beatles catalogue.