The Dawning of the New (10 of Swords Spread) 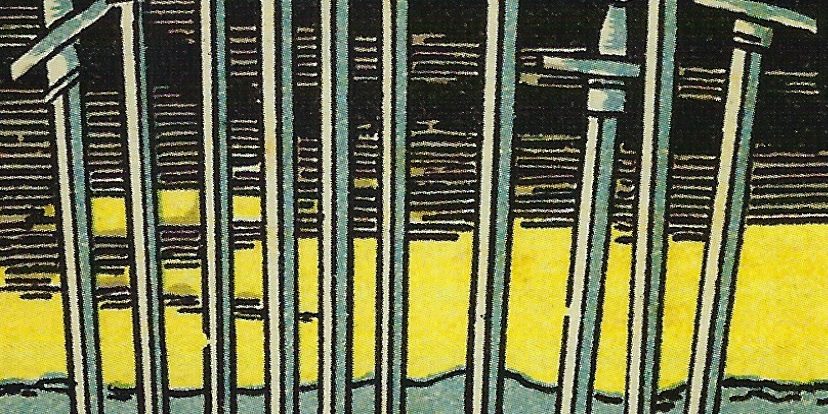 This past Saturday, as the country waited (and waited…) for the last remaining states to complete counting their mail-in ballots, I hosted the first Saturday morning edition of my online Meetup. In the days leading up to the Meetup it became clear that the topic should be related to the state of the contentious election. Sure, many of us want a break from thinking about politics. But in this case it felt necessary to address the anxiety that was impossible to ignore. I was feeling anxious on multiple levels, and I knew it was likely those who attended the Meetup would be too. (How could you not?)

Coincidentally, five months earlier I hosted my very first Meetup on Wednesday evenings, and it came under similar circumstances. It was the beginning of June and protests were happening all across the country over the killing of George Floyd. At that time, as I was considering what the topic and activity should be, I was feeling anxious over what was happening in the country and figured those who attended the Meetup would too. I’m reluctant to bring politics into my business, but the occasion was less about the politics than it was about gaining clarity and healing.

On both occasions we used the tarot spread I created to ease our anxiety and cultivate the dawning of a new, more loving and understanding perspective. That spread appears below.

The spread I created was inspired by the 10 of Swords. This is one of the most alarming-looking cards in the deck. The Rider Waite Smith (RWS) version shows a man lying face down with ten swords piercing his back. The sky is dark and he appears dead. It’s an arresting image. 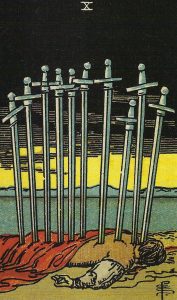 It’s not surprising, then, that the 10 of Swords is one of the cards people most dread getting in a reading. But not me. I’m not exaggerating when I say it’s one of my favorite cards to receive. In its most basic sense, the 10 of Swords points to a situation that has been causing increasing amounts of stress, tension, pain, or suffering. The card doesn’t portend doom by suggesting something bad is going to happen. Rather, it invites us to look honestly at what’s happening in our lives for something – big or small – that has been a major thorn in our side, perhaps for a long time.

As a “10”, the card represents the end of a cycle, and therefore the potential for the start of a new one. Receiving the card in a reading means that the situation is ready to come to some sort of resolution or breakthrough. If it’s darkest before the dawn then the 10 of Swords can be appreciated as that moment when the dawn is just beginning to break. Notice on the RWS card that light is dawning over the horizon.

Another way to see the image is that the person impaled by the ten swords is a symbolic personification of some part of ourselves that is ready to die, granting us much needed release and even transcendence. For however long we’ve been suffering through the stress or pain, one sword after another has been metaphorically plunged into our back. Now at the point of ten we’ve reached the end. We can’t take anymore; the moment of resolution is at hand. The degree of our suffering at this point is based on our willingness to see the truth and accept it.

If we see and accept the truth, we’ll feel as though we’ve finally “seen the light” and the pain will end. But if we don’t, the 10 of Swords can signify much suffering and perhaps even ruin to come. Since the suit of Swords corresponds to the element Air, this card relates to something mental. This means there is a strong mental element to the situation, felt as anxiety and suffering caused by our thinking or perspective on the situation.

This may sound pretty rough, so I feel it’s worth repeating: I like getting this card. Seeing it invites me to embrace the opportunity to bring peace and closure to a difficult and stressful situation going on in my life. The way I see it, it’s much better to face the situation and deal with it than it is to continue ignoring it and live with unconscious (or conscious) suffering day after day, week after week. The other card in the deck I often associate with the 10 of Swords is the Death card, Key #13, another example of a “scary” card that is actually a beautiful blessing.

When the 10 of Swords appears in your readings, consider a source of pain and suffering you’ve been going through, perhaps for a long time. It could be something major, like making a break from a relationship or job. Or it may be something more trivial but still relevant, like confronting your boss or spouse over a situation that’s been a problem for too long. Remember to take a careful approach to the situation and not act rashly. The 10 of Swords gives you the power to face it with courage and mindful awareness.

The 10 of Swords Spread 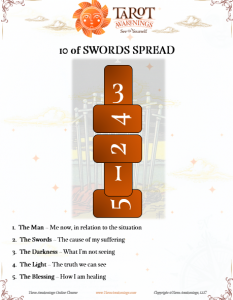 As I prepared for that first Meetup in June, I wanted to create a spread that would allow its user to face a situation that feels like the 10 of Swords. In other words, something that feels like it’s reaching a breaking point, as the protests did that were raging over George Floyd’s murder. And this sense of extreme tension is what led me to use the spread again this past Saturday, as the election results hung in the balance.

Please feel free to use the 10 of Swords spread to gain greater perspective of any situation where you seek the end of suffering. Each card in the spread is inspired by an aspect of the RWS version of the 10 of Swords.

To use the spread:

Center yourself and shuffle the rest of the deck.  As you shuffle, set the intention that you’re ready to see the dawning of a new perspective. Despite the difficulty of the situation, decide to be in a positive state of heart and mind as you consult the cards. Keep in mind that resolution doesn’t always come the way we want it to, so try not to have any specific outcomes in mind as you perform this spread. Instead, trust that you will receive greater wisdom, peace, and understanding around your situation.

Then deal as shown. Take your time to interpret the results and write reflections in a journal.

The 10 of Swords Spread and the Election

Here were the results of the spread regarding the election, which had still been undecided when we performed it.

6 of Swords – This card shows a family in a boat moving to safety. It is often associated with clear thinking and making progress. We’ve been in a difficult situation but we are in a process of going to a better place now.

The Trump era has been dominated by darkness, lies, conspiracy theories, and fear. Many of us, regardless of our personal politics, have been motivated the past four years to think more clearly about who we are, what we believe, and what direction we believe the country should go. The election is the opportunity to choose a new direction.

This card confirmed for us what we wanted to believe: that the country in general is moving to a better place. After all we’ve been through, we’re now thinking more clearly and moving accordingly.

Card 2 (The Swords) – The Cause of Suffering

10 of Wands – This card shows a man carrying 10 large wands while hunched over. He looks like he’s working very hard. The card signifies being over burdened and reaching a breaking point. (Note it’s also a “10”, meaning something that is nearing an end)

Conditions for poor, working class, and middle class Americans have gotten progressively worse over the past generation. Most people just aren’t making enough money to pay the high costs for living and raising a family these days. Trump rose to power promising things he cannot deliver, but he’s known how to appeal to the people feeling like the 10 of Wands. They just can’t keep working so hard and not having enough to pay for health care, education, and the many other high costs of living.

This card helped us feel greater empathy and understanding for the people who continue to support Trump. (not the cynical people in government or media, acting in Bad Faith, of course) Americans are getting a real bad deal these days, which has led many to buy in to the proposed solutions of a dubious salesman like Trump.

Wheel of Fortune – This is generally seen as the card of luck or the turning hands of fate. Every situation is a new opportunity to make our own luck if we’re ready for it. All cycles end, leading to new ones.

It’s hard to ignore that it feels like we’re now in the midst of a great changing of cycles. Trump and the Era of Trump represent the apotheosis of the old guard. The world is changing and so is the makeup of the country. Try as some might, we’re not turning the clock of our shared destiny backward.

Surely there’s an opportunity here, if we embrace a new way forward. This card is in the “dark” because so many people remain fixated on the demonization of the other side and tribalism. But if more people could allow themselves to see the bigger picture they would see that this horrible era could be the start of something truly wonderful.

Knight of Swords – The figure on this card is sure he’s right about his point of view, and has little tolerance for those who disagree. Here’s the card of that tribalism and anger that is blinding us to the greater truth. That’s what we see when we turn on the news and scroll though our social media accounts: arguing, resentment, and a never-ending demonization of the horrible people who are on the opposing team.

Everyone is shouting. The most popular cable news channel is telling its viewers that the election is a fraud. Trump is launching legal measures to have the election results thrown out. Violence still seems possible, based on what occurs over these next few weeks and months.

This card reminded us that there’s a long way to go in this saga. Too many people are too much on edge and there’s not going to be a kumbaya moment any time soon. Here’s an example of how working with tarot isn’t just “love and light” all the time. We can aspire for ideals while also remaining in the present reality of our situation.

Card 5 (The Blessing) – What is Healing

Death – This card signifies the death of old attitudes, beliefs, and/or values. Once something has died and closure has been attained, rebirth into a greater way of being becomes possible.

Trump’s presidency is over. And the old dogmas that he represents no longer ring true. We are currently in the very messy and scary period of “Death” of so many old ways: how we approach business, government, religion, and so much more. Clearly we are ready for a rebirth into something better than what we’ve had for the past four years, and arguably much longer than that.

We were delighted to see the Death card as the last in the spread. Much like the 10 of Swords, it represents the end of something painful and the start of something new and beautiful. But it requires us to have the courage to let go of what is dying.

A moment after completing the spread, we concluded the Meetup and I logged off my computer. I went downstairs where my wife had news for me: the election had just been called and Biden was declared the winner. 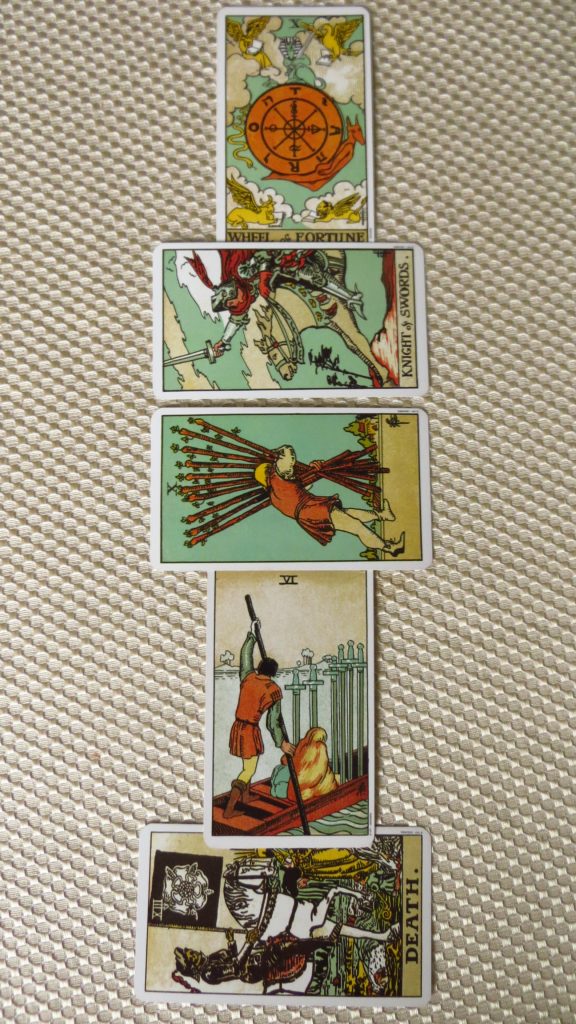