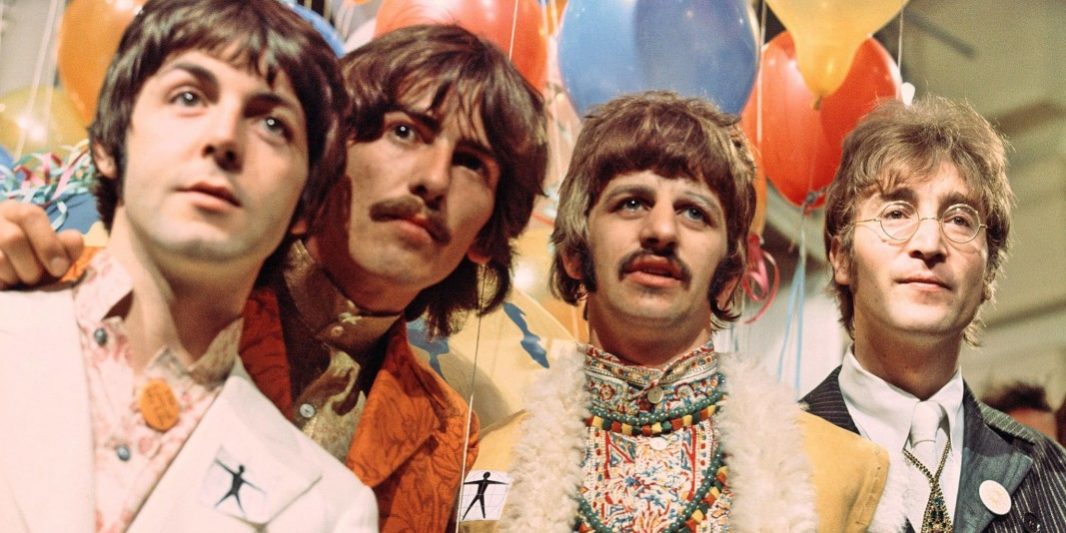 During the Summer of Love, the Beatles had reached a whole new peak of fame and notoriety. Sure, they’d been world-famous pop stars for years. But in June 1967 they’d just released Sgt. Pepper’s Lonely Hearts Club Band. They were now recognized as true artists on the same level as the cultural icons they’d placed on the cover of that revolutionary album. They’d taken their place as paragons for the New Age.

Now at the pinnacle of their popular and artistic status, they were given the opportunity to represent the UK on a television program called “Our World”. The show was broadcast live to a record 25 countries and seen by an estimated 350 million people. The Beatles used the occasion to share a message that would ultimately become their legacy. It was a declaration of the universal power of love. The song soon became a #1 single all over the world, and later it was added to both the Magical Mystery Tour album and Yellow Submarine animated film.

For the live broadcast, the Beatles created an atmosphere in the joyful and communal spirit of the counterculture they were leading. They wore hippy-style clothing with flowers in their hair and the studio was decorated with balloons, signs, and streamers. To help sing the ecstatic coda, the band was accompanied by such luminaries as Mick Jagger, Keith Richards, Eric Clapton, and Marianne Faithfull. Their manager Brian Epstein joined in the fun too, and later said about the song, “The nice thing about it is that it cannot be misinterpreted. It is a clear message saying that love is everything.” 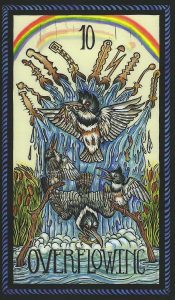 The tarot’s 10 of Cups corresponds perfectly with this message. As a 10, this card represents the maximum expression of the elemental energy shown by the suit. The suit of Cups symbolizes the element Water, which relates to matters of the heart. Compared to the 9 of Cups – the card that symbolizes getting what we most want – the 10 asks us to consider what lies beyond personal desires. At the peak level of 10, we consider something bigger than ourselves, such as the spirit of universal love that is shared by everyone. The 10 reminds us that in the end, love is all you need.

In a cynical world it’s easy to dismiss this utopian vision. A hardened heart rejects it as silly. But in this moment, you’re invited to really think about it. Or better than thinking it, FEEL it in your heart. Open yourself to feeling love toward your family and friends, or even your enemies. Feel love for your life by having gratitude for its many blessings. Perhaps best of all, feel love for yourself. Forgive your imperfections and mistakes. See and truly acknowledge the beautiful soul you are underneath all the pains and confusion of daily life in our crazy world.

Opening ourselves to love is connecting to the source of life itself. It’s what the Beatles knew to be true, and wanted to share with all the world.

“Nothing you can make that can’t be made

No one you can save that can’t be saved

Nothing you can do, but you can learn how to be you in time

All you need is love”

This is song #56 of the Beatles Song Tarot Project. Click here to learn more about this magical, mystical trip through the Beatles catalogue.