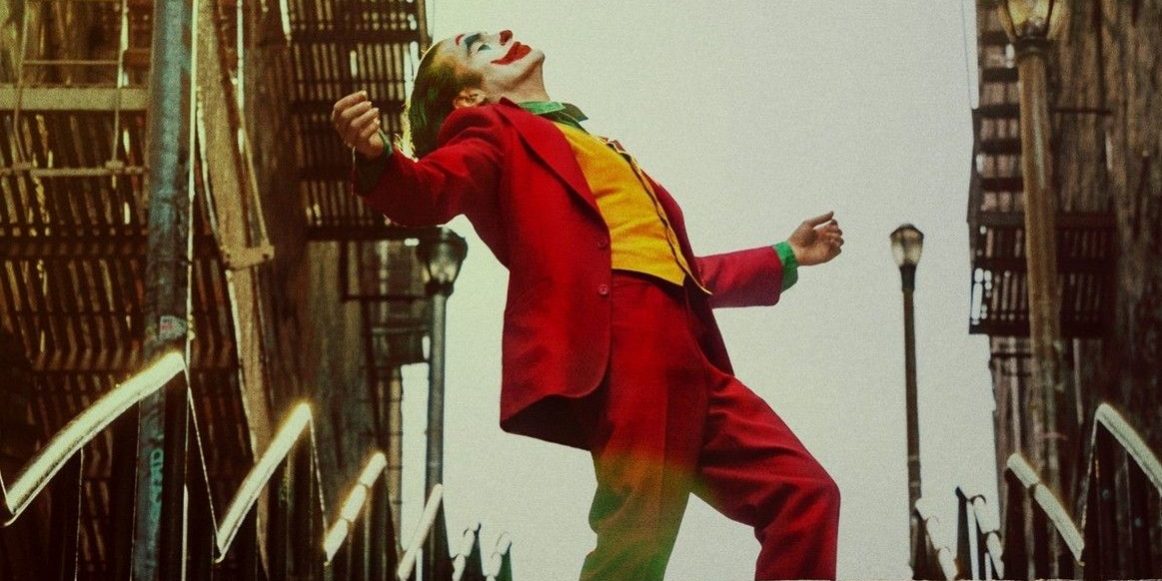 [WARNING: this post contains spoilers about the movie Joker.]

I’ll be the first to admit that I have comic book movie fatigue. But Joker transcended the genre. On the surface it was about how a disturbed man becomes a psychotic super-villain. But a closer look reveals the movie as an allegory for the process of spiritual awakening that may ultimately lead to self-realization.

I was originally not planning on seeing Joker. When I heard there was going to be yet another movie about Batman’s arch nemesis, I didn’t think it would be worth the bother. Jack Nicholson memorably filled the role 30 years ago, Heath Ledger won the Oscar for his portrayal a decade or so ago, and Jared Leto took a turn all too recently. What more could there be to this story?

I became intrigued when I heard that both critics and viewers were highly divided, with some reporting to hate it while others loved it. To me this is always a good sign I will probably like a movie because there’s something interesting about it. Besides, it features one of my favorite actors in the titular role, Joaquin Phoenix. So I went hoping for something, well…interesting.

The first clues I had that I was going to see something very interesting came early in the film. On a few occasions near the beginning of Joker we see a clock reading the time 11:11. I immediately recognized that time as one of special significance.

The movie’s director Todd Phillips has denied there being any special significance to this time on the clocks, but I knew that he was slyly aiming to convey synchronicity. Synchronicity is the term coined by Carl Jung for the experience of meaningful coincidence. These are those rare special moments when we suspect that something mysterious is happening in our lives, although we have no logical explanation for it. We may suspect we’re seeing “signs” from some higher power in our lives.

Examples might include seeing someone randomly that you just had a dream about. Or seeing the same number repeatedly on the clock or elsewhere, either 11:11 or another combination. Or perhaps you read something online and then come face to face with it in real life. Regardless of the details, the experience of synchronicity suggests a connectedness between events that would not logically have any relationship.

I don’t know where and when the association began, but the number 11:11 has come to be known as a time of special significance. There are those who believe that this time has a unique frequency, which is why some suggest making a wish or saying a prayer if you should look at the clock at the moment 11:11 appears. Another theory says that seeing 11:11 frequently is a sign of spiritual awakening. In other words, people who repeatedly see this number on clocks are said to be undergoing some kind of transformational spiritual experience. Of course anyone may see the time 11:11 occasionally but, according to this theory, to see it over and over signifies that there is something remarkable and metamorphic happening within the person.

I searched online for more about 11:11, and I couldn’t find any definitive explanation for where it came from or what it’s supposed to mean. I certainly found a lot of wild theories! There are many blogs and  websites about angels, quantum vibrations, numerology, along with a lot of other things that frankly are really hard to fathom or explain.

Although I can’t logically explain 11:11, I can attest to it being a true phenomenon.

As I underwent the early stages of my awakening experience in 2012, I repeatedly looked at the clock at exactly 11:11. Initially I saw it as just coincidence, but after a while I couldn’t help but take notice. I also started to observe special sensations happening within me when I noticed that time, such as a deep sense of inner peace, and unmistakable feelings of love. It made no logical sense, but for a few months I continuously observed this time and sensed big changes were occurring within me.

I hasten to add that during this entire time I had never heard of 11:11 as a special number. I wasn’t into New Age philosophy and I never thought to look up what it meant online. It’s not like I heard of it and was subconsciously seeking to look at the clock at a pre-determined special time. As a skeptic I know exactly what I would think if someone told me this happened to them (at least until I experienced it myself).

Based on my personal experience, when I saw 11:11 appear multiple times early in Joker I was alerted to the subtext of the movie. This is a film about awakening.

Awakening to the Truth

What is an awakening? Awakening is the realization of deeper truth that is contained within the essence of us all. Everyone possesses a source of deep truth and wisdom inside of them, but most of us are either too busy, distracted, or unaware to ever realize this incredible universal gift. Some lucky people (or very unlucky, depending on your perspective) will discover this inner source, usually due to undergoing profound pain and suffering.

In the movie, Arthur Fleck is a disturbed (but mostly harmless) loner working as a party clown. Early on, around the time we see 11:11 on the clocks, Arthur experiences a series of painful events that ultimately force him to see the truth of himself and his life. The remainder of the movie portrays Arthur’s awakening, which eventually leads him to become Joker.

Awakening is a destructive process that tears down many of our long-held beliefs, attitudes, and values. All that we’ve learned and come to take for granted about the world and ourselves comes under scrutiny. The version of reality which our ego has helped to create for many years may be destroyed by greater realizations we discover within ourselves.

We witness Arthur undergo this difficult process of learning the truth. For example, his sickly mother explains to him that local politician Thomas Wayne is his abandoned father. When Arthur confronts Wayne, he is told that his mother is not only delusional but crazy. Looking into his personal and family history, he visits the local mental hospital where he learns that both his mother and he have serious mental problems. He also learns that he’d suffered profound physical and psychological torture as a young boy.

Scene after scene we see Arthur’s world crumble. He’d thought of himself as a funny guy with dreams of becoming a stand-up comedian. But after a disastrous open-mic performance goes viral, he is mocked on television by a talk-show host he had always loved and admired. Arthur also comes to realize that his condition of uncontrollably laughing at inappropriate times is not neurological, as he has always been told. He awakens to the truth that it has always been just a part of his personality all along.

A crucial turning point in Arthur’s awakening occurs on the subway, just after losing his job as a clown. He defends a woman from three bullying young men, who proceed to beat him up. But Arthur gets his revenge by shooting them dead. Through this violent act Arthur gains greater peace than he’s probably ever felt in his entire life. After his violent act we soon see him doing tai chi. He’s in a deep state of calm, dancing as life energy flows through him.

The liberation he feels because of the murders allow him (and us, the viewers) to see that all the times he’s spent with his “girlfriend” were actually just going on in his mind.

He’s gained lucidity. He is awake.

Awakening is the crucial start of a larger process that Carl Jung called individuation. This transformational process is the full realization of Self and is only possible by first experiencing the uncomfortable and often painful process of awakening.

The individuation process requires us to awaken to deeper truth, shed outworn beliefs and values, and face the darker side of your own nature. Once again we have Carl Jung to thank for the term Shadow Self (or just “shadow”) for this darker part of the psyche that we all possess inside of us.

Arthur’s shadow is unleashed through his actions on the subway. But rather than feel shame, it empowers him. He did what felt both right and natural. He is further bolstered by the fact that his killings begin a populist political movement throughout the city against the wealthy. He becomes a folk hero, and he senses that he’s found his purpose in life. Now having discovered both his own true nature and personal calling, he’s empowered to kill an old friend who betrayed him. Unlike the incident on the subway where he could have pretended he was acting in self-defense, this act is pure savagery. He is now a stone-cold, premeditated killer, and appears at complete peace with himself.

He now fully accepts and embodies his true nature and is set free of all limitations. The process that began with the 11:11 synchronicity of awakening has led to his individuation. He is now self-realized.

The most memorable scene out of many in Joker comes next. Set to the tune of “Rock and Roll pt. 2” by Gary Glitter, Arthur descends the giant stairwell near his apartment, a stairwell that up until that point we’ve only seen him climb up. He is fully dressed in his Joker makeup and clothes and dances with lightness and confidence, in pure enjoyment of the moment. Here this man who had previously been awkward and consumed by mental demons has been set free. He moves with a joie de vivre that few people experience in their entire lifetimes.

In a scene shortly afterwards, Arthur is set to appear on the talk show where he’d previously been mocked. He requests that he be introduced not as Arthur Fleck, but simply as “Joker”. This is significant because it is proof that the man-formerly-known-as-Arthur-Fleck now identifies as a new person named Joker. The transformation is complete.

Goodbye Arthur. Hello Joker. And in just a moment, goodbye to the host of the show, who Joker shoots dead on live television.

In the closing scene we see Joker locked away in the mental hospital. As he takes the life of one final victim, we sense that although he may be physically confined, he feels truly free within himself.

Joker is certainly not your standard movie about comic book heroes and villains. It’s a thoughtful and fascinating examination of an example of the transformational process of becoming a fully realized version of oneself.

The repeated synchronicity of 11:11 early in the movie alerts us to Arthur’s awakening. From there, he slowly learns the greater truth of himself and his life, while the illusions he’s learned to take for granted fall away. It is a painful period of transition for our lead character. His old self falls away, creating the conditions for a new Arthur (Joker) to emerge.

Most people never have an awakening, much less experience individuation, because of just how difficult the journey is. But for some there is little choice. Eckhart Tolle said, “some people awaken spiritually without ever coming into contact with any meditation technique or any spiritual teaching. They may awaken simply because they can’t stand the suffering anymore.”

Arthur was suffering. It became time for him to awaken to his essential nature and become his true self. On the surface it’s tempting to see the movie as a story about the making of a psychotic super-villain. But the movie is far more nuanced than that. Arthur discovers who he really is inside and becomes the fullest expression of that man. In embracing the anarchy that dwells within his psyche, he finds purpose in his life and becomes an expression of that purpose.

Trump and the Tower: Understanding this Era through Tarot’s Major Arcana
May 9, 2019